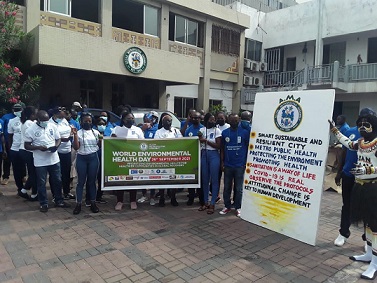 It was on the theme: “Prioritising Environmental Health for Healthier Communities in Global Recovery.”

The United Nations General Assembly in 2011 declared 26th September as a day to promote and increase awareness of Environmental Health Practitioners and to project their roles and duties to humanity.

Professor Edward Wiafe, the Dean of School of Natural and Environmental Sciences, University of Environment and Sustainable Development, who made the call, said the time to prioritise environmental health was now to make the nation healthier.

“As much as the Day is being celebrated on 26th September, 2021 while the new chief executives of the assemblies are being confirmed, I appeal to them to put environmental health issues first on their scale of preference,” he said.

Prof Wiafe said there was the need for government, policy makers and development agents to understand the impact of good environmental health on development and factor same in policy planning.

“Again there is the need to re-look at the management and governance of human settlements to strengthen resilience and preparedness, and support local recovery,” Prof Wiafe said.

He recommended that the assemblies should marshal the required political will to ensure communities became more safe, resilient and sustainable with the appropriate technological measures.

He called for the promotion of urban forestry by incorporating trees in the design and development of cities.
“This will promote carbon sequestration, reduce temperature, and prevent soil sealing, while enhancing soil infiltration, which reduces flooding,” he said.

Prof Wiafe said because of unhealthy environment 12 million people around the world died every year, and that could be prevented.

Environmental pollutants could cause health problems like respiratory and heart diseases and some types of cancers, he said.

“It has been postulated that people with low income are more likely to live in polluted areas and have unsafe drinking water and more so children and pregnant women are at higher risk of health problems related to pollution,” he said.

Prof Wiafe said the work of environmental health officers must be accorded much respect as they exposed themselves to hazards at the expense of their health, adding that their hard work prevented the COVID-19 from having greater impact on the country.

“These practitioners, in their field of work, have a high knowledge of tradition; they are familiar with the risks and know how to get the ‘message’ across to the public. They think globally and act locally, probably because pollution has no respect for political boundary,” she said.

Madam Kuukyi said the COVID-19 pandemic had demonstrated the vital role that environmental health practitioners played worldwide and called on the government, civil society and non-governmental organisations, religious bodies, and opinion leaders to prioritise environmental health in their activities.

“It should be noted that with proper environmental health practices the public is prevented from contracting communicable diseases such as typhoid and cholera,” she said.