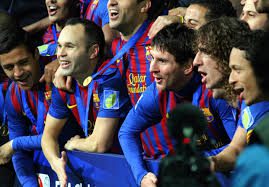 With Atletico Madrid visiting Real Madrid on Saturday afternoon, at least one of Barca’ s closest pursuers is guaranteed to drop points this weekend and with Barca already holding an eight-point lead over Atletico and nine over Real, a win for Barca would be virtually decisive. Sevilla will be Barcelona’ s rivals in the final of the Copa del Rey knockout competition at the end of the season and the sides have already met twice this campaign, with Barca winning a thrilling European Supercup title, but sliding to defeat in Sevilla’ s Sanchez Pizjuan Stadium in the first league clash of the campaign.

That win was Sevilla coach Unai Emery’ s first ever triumph over Barca and reflects a season which has seen Sevilla become unbeatable in front of their home fans, but unable to win away from home.

Sevilla visit Barcelona without a win in 11 league matches away from their stadium this campaign and even lost to Norwegian outfit, Molde in the Europa League on Thursday, all be it with the excuse that their 3-0 first leg win a week earlier had all but booked their place in the last 16 of that competition.

Barca will go into the game on the back of their 2-0 Champions League win away to Arsenal and a rather less convincing victory against Las Palmas last weekend.

Luis Enrique has looked to rotate his key players and will no doubt make some changes to Tuesday’ s side ahead of a round of midweek fixtures next week.

Three players who are unlikely to get a rest, however, are Leo Messi, Neymar and Luis Suarez, whose goals continue to dig Barca out of trouble when they are below their best. Expect those three to start, along with Sergio Busquets and Arda Turan, while Aleix Vidal could well play at right back against his former club.