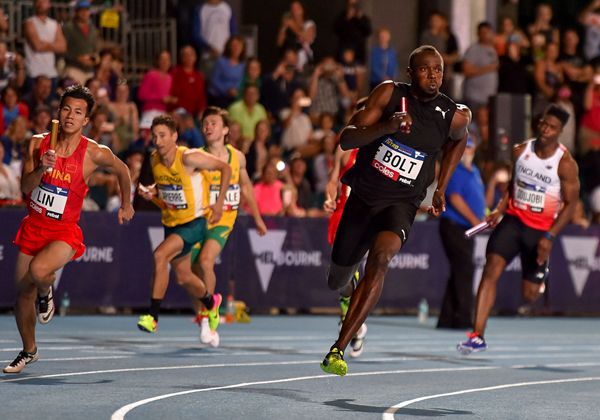 Usain Bolt competes in the mixed 4 x 100 meter relay at the Nitro Athletics.

Usain Bolt and Asafa Powell helped the Bolt All-Stars win the 4×100-meter mixed relay yesterday on the second of three nights of the Nitro Athletics meet in Melbourne, Australia.

A botched baton change in the mixed relay by Australia cost it overall victory on the night. The home team initially thought it had beaten the Bolt All-Stars but was penalized 50 points after Jack Hale failed to legally pass the baton to Fabrice Lapierre in the second changeover.

That penalty saw Australia slip to second with 895 points overall, 35 behind the Bolt All-Stars, who also won the first meet last Saturday at Lakeside Stadium.

The six teams, including Japan, New Zealand, England and China, will conclude the meet tomorrow when Bolt is set to also contest the individual 150 meters, having only run a leg of the relays in each of the first two meets.

A commanding victory by Ryan Gregson in the penultimate event of the night — the men’s elimination mile — ensured Australia remained close to the Bolt All-Stars.

Bolt’s team picked up double points in the mixed relay, but Australia’s strength was in the longer track events.

In addition to wins by Gregson and Heidi See in the two elimination miles — where the last-place finisher after each lap must leave the track, Luke Matthews and Linden Hall combined for first place in the mixed 3-minute relay and Morgan Mitchell won the mixed 2×300 relay with Luke Stevens.

With Bolt revving up the crowd, Nina Kennedy of Australia tied for first in the women’s pole vault with a best clearance of 4.10 meters.

“He is just the pinnacle of our sport and he’s out there clapping for me,” the 18-year-old Kennedy said.

With 6,722 fans turning up yesterday and tomorrow’s meet already a sellout, more than 22,000 will have watched the three-meet series.