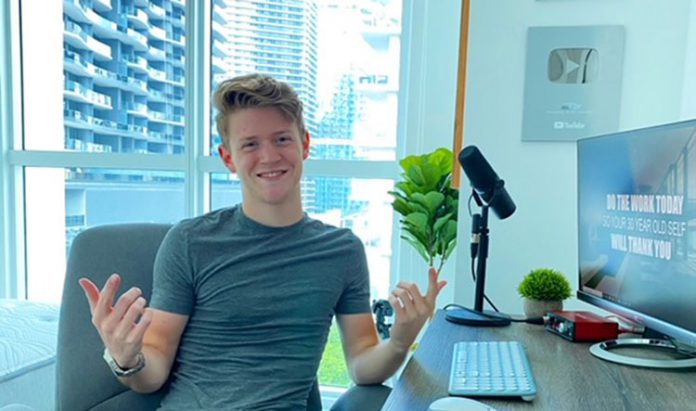 YouTube is a highly competitive space. Tubics mentions that there are over 37 million YouTube channels in existence as of 2020. With so much competition, success is more of an exception than a rule. In most cases, YouTube creators don’t make much money. However, at the top of the pile, we see some YouTubers raking in millions of dollars a year. Some of this could be chalked up to virality, but more often than not, it’s because these entrepreneurs have learned the art of entertainment. YouTube and other video streaming sites have replaced television as the way to get on-demand content. One of the youngest YouTube entrepreneurs out there, Caleb Boxx, has a remarkable story about how he came to be such a successful business owner.

Not New to the Game

Despite being a mere 20 years of age, Caleb is no stranger to the world of business. Before setting foot on YouTube, he was responsible for opening and maintaining several different businesses. One of these money-making ventures came in the form of a Minecraft server where he would sell digital goods. Later on, when he grew comfortable with his computer skills, he was able to sell enterprise-level websites to businesses. Yet even then, he felt that this wasn’t what he wanted to do with his life. YouTube was like opening the door to a fantastic new world—one that Caleb felt at home in. With just $200 in his bank account and a passion for discovering the unknown, Caleb set off on this journey and quickly rose to prominence. Today, the young star owns several YouTube channels, with a combined video view count of well over 400 million.

Most businesses settle for staying small. Clear Capital Group outlines several reasons why businesses remain small, but in a digital environment, staying small limits one’s earning potential. Caleb’s road map for success is defined by a system he calls YouTube Automation. Caleb’s method leverages information he picked up from his mentors, each of whom is among the most popular YouTubers in their niches. Using their insight and his own marketing know-how, he put together a system that allows anyone to become a successful YouTube entrepreneur and benefit from the passive income it generates.

The flaw in many YouTubers’ systems is that they rely on a single niche to generate their income. Caleb realized that there is a better way to do this, but it requires a team. He sources skilled freelancers and tasks each subgroup with developing videos within their chosen niches. The result is a series of high-quality videos, each polished and ready for release on time every week. Caleb just has to log into YouTube and post them so that they come out on schedule. The system doesn’t even require him to sit in front of a camera or spend hours editing the video to make it perfect. By having the right team, anyone can become a YouTube entrepreneur.

For newcomers to the space, Caleb advises them to look for a stable and dependable team. Sourcing freelancers is an inexact science; many freelancers advertise themselves as being able to do something but failing outright when faced with an actual job. Finding a competent freelancer to fit on a team and loyal staff who won’t jump ship is a challenging prospect but well worth the effort. Caleb covers all of this in his YouTube Automation system and insists that the four-hour work week isn’t just a dream for entrepreneurs. With proper planning, it can be a reality quickly enough.