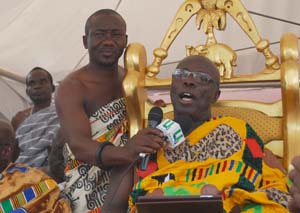 Osagyefo Amoatia Ofori Panin, the Okyenhene, and the President of the Eastern Regional House of Chiefs, has expressed concern about the disrespect for Ghanaian moral values. He has, therefore, called for a reorientation to uphold the core values of the Ghanaian society.

Osagyefo was addressing the Trinity Congregation of the Presbyterian Church of Ghana, as part of activities marking the Second African Week, dubbed: ?Africana Week Celebration?, at Koforidua.

The theme for the celebration is ??Systemic Change: A key to building a 21st Century Church??.

He said many people disregarded traditional values such as respect for the elderly and those in responsible positions.

As a result people often insulted the president, chiefs, and other senior citizens with impunity.

He, however, tasked public office holders to use their positions to help improve the lives of the ordinary persons and avoid arrogance and selfishness.

The Okyenhene urged Ghanaians to desist from politicizing national issues, saying the practice was dangerous to national development.

Barima Kofi Adjei Twinin, Dwantoahene of Akyem Abuakwa Traditional Area, said, the role of every quality leader was to leave a legacy for those who would come after them.

The Reverend Ransford Awuku-Gyampoh, the Minister in-charge of the Church, who delivered the sermon, called for leaders of change to move the church forward.

He advised Christians to desist from judging others and do self-assessment.