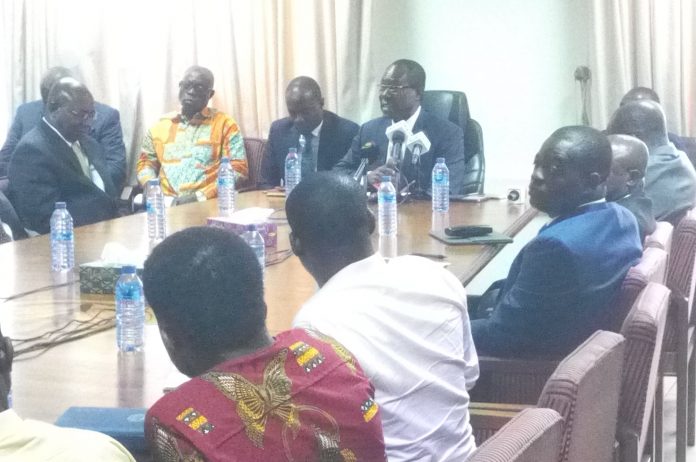 The Chief Executive of Cocobod, Joseph Boahene Aidoo has described minority comments on their operations as reckless and irrational.

He regarded the call by the minority in parliament, demanding answers to the utilization of proceeds relating to cocoa production above the 850,000 metric tonnes cocoa production projected for the 2016/2017 crop year as thoughtless.

Speaking at a press conference in Accra on the 1st November, 2017, Mr. Joseph Boahene Aidoo indicated that, “we cannot allow such attitude to continue unchecked because it enormously and negatively impact on the sustainability of the cocoa industry”.

“The minority who are supposed to know the true situation of the board have rather resorted to peddling of misinformation, half-truth, concocted stories and blatant lies in some instances just to throw dust into the eyes of the public in general and farmers in particular” he stated.

The new management of COCOBOD, he said upon assumption of office in February 2017, inherited a liability of US$280 million dollars (equivalents to 61,894 metric tonnes), as a result of roll over contracts from 2014/2015 and 2015/2016 season, adding that part of the 2016/2017 production had to be applied to fulfill such sales contracts, explaining the utilization of the so called excess production.

“It is instructive to note that the previous COCOBOD administration under the national democratic congress government failed to pay for the annual syndicated funding in 2014/2015 and 2015/2016 with cocoa deliveries as normally the case in the country” he hinted.

Cocoa production under the previous NDC government, he said declined as a result of the abandonment of the cocoa rehabilitation programme. He hinted that cocoa farmers were neglected and budgeted production could not be achieved to meet repayment of contracted loans and advances with cocoa sales proceeds.

He accused the John Mahama administration of “syphoning” millions of dollars from the Board’s accounts.

He said former COCOBOD CEO, Dr Stephen Opuni, “used export duty payments from COCOBOD as a conduit to syphon funds for activities not related to cocoa.”

Touching on the free fertilizer programme, he said the programme was used by the NDC to introduce sub-standard and inefficacious fertilizers into the cocoa Hi-tech programme.

The rehabilitation programme, Mr. Boahene Aidoo said was abandoned by the NDC regime, and “therefore the party cannot claim credit for the cutting of mistletoes”.

He disclosed that the current New Patriotic Party (NPP) government has introduced the fertilizer subsidy programme with quality and high yielding fertilizers to help boost cocoa production in the country. “It is very interesting to hear the minority talk about challenges with the cocoa mass spraying programme when government has, in fact, re-launched the programme to make it more viable. All the so-called challenges mentioned are non-existent” he stated.

He said it would be unfortunate for COCOBOD to politicize the vital cocoa spraying programme which has played a very important role in increased cocoa production since its introduction in 2011.

He indicated that the NDC administration spearheaded procurement of agrochemical and fertilizer inputs above allocated budgets, adding that budgets for the years were exceeded through padded contracts.

He also disclosed that penchant to siphon funds through inflated contracts was rampant in the NDC administration through ill-conceived construction contracts in the cocoa sector. The NDC past administration, he said secured an amount of US$ 1.8 billion for the 2016/2017 cocoa purchases which was projected at 850,000 metric tonnes.

As at January, 2017, he said the secured US$ 1.8 billion by the NDC had been fully drawn and utilized when only 587,125 metric tonnes of cocoa had been purchased.

The Minority argued the foundation laid by the past NDC government was good enough for an increase in the producer price from the current ¢475 per bag to a higher one.

The MP for Bodies, Hon. Sampson Ahi, said before exiting power in January 2017, the NDC left more than $400 million in revenue from cocoa.

But Mr Boahen Aidoo retorted, saying the Mahama administration took loans in the name of COCOBOD and used the money to pay the judgement debt.

“The President Mahama/Opuni tenure used export duty payments from COCOBOD as a conduit to syphon funds for activities not related to cocoa,” he said.

“This amount was taken from COCOBOD in the name of “exercise” duty (in the word of the then Deputy Minister of Finance – a Board member of COCOBOD Casiel Ato Forson). The payment under export duty was to make it appear legitimate,” he stressed.

He indicated that, the guest house was built in John Mahama’s hometown Bole, while in office, for his personal comfort and relaxation.

“These contracts, were awarded without proper value for money analysis, bringing into question the motive for the contract for instance, to construct a guest house at Bole in the Northern Region, which was needless at the time it was awarded. President John Mahama was said to have influenced the awarding to enable him enjoy a comfortable holiday during his visit to his constituency,” he noted.

He however revealed that, the Economic and Organized Crime Office (EOCO) is currently investigating all financial malfeasance during the tenure of former CEO Dr. Stephen Opuni.