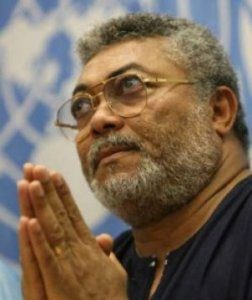 The highly cherished leader died on Thursday at the Korle Bu Teaching Hospital after a short illness.

In a joint statement signed by FIFA President Mr. Gianni Infantino and its’ General Secretary Fatima Samoura, said there were saddened by the death of the former President.

“It was with emotion and sadness that we learned of the passing of His Excellency Jerry Rawlings, former President of the Republic of Ghana.

“Tribute are flowing from the African continent and elsewhere to salute his memory, and we would like herewith to join them.

“As President over the the destiny of Ghana from 1993 to 2001, the statesman recognised for his passion discipline and values, the charismatic leader having liberalised Ghana’s economy, encouraging investment in key economic sectors, H.E Jerry Rawlings will not be forgotten,” the statement said.

Notably, the Black Stars during Thursday 2-0 win against Sudan wore a black hand band in memory of the departed former President as well as observing a minute silence.