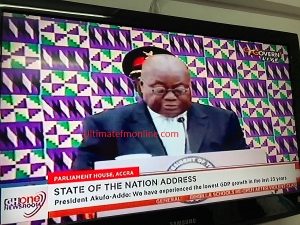 President Nana Addo Dankwa Akufo-Addo has affirmed that his government would work with the Seventh Parliament to ensure the passage of the “Affirmative Action Bill” which would guarantee the equality of women participation at all levels.

The President said this when he delivered the 2017 State of the Nation Address in Parliament on Tuesday.

He said the initiative would ensure the fulfillment of the objective of 30 per cent women involvement in governance.

President Akufo-Addo said the Disability Act would be enforced to ensure its compliance with access to public buildings for the physically challenged.

“The Minister for Local Government will also see to the implementation of the District Integrated Social Services programme for children, families and vulnerable adults”.

On energy, President Akufo-Addo said his government inherited a heavily indebted energy sector which had collapsed businesses and promised to revamp the sector.

On education he said the Free Senior High School Policy would take effect from the 2017/2018 academic year and that emphasis would be laid on the teaching of mathematics and science in all schools including information and communication technology.

President Akufo-Addo gave the assurance that trainee teachers’ allowances would be restored and expressed confidence that the “One Village One Dam” initiative would create significant job opportunities for the unemployed in the country.