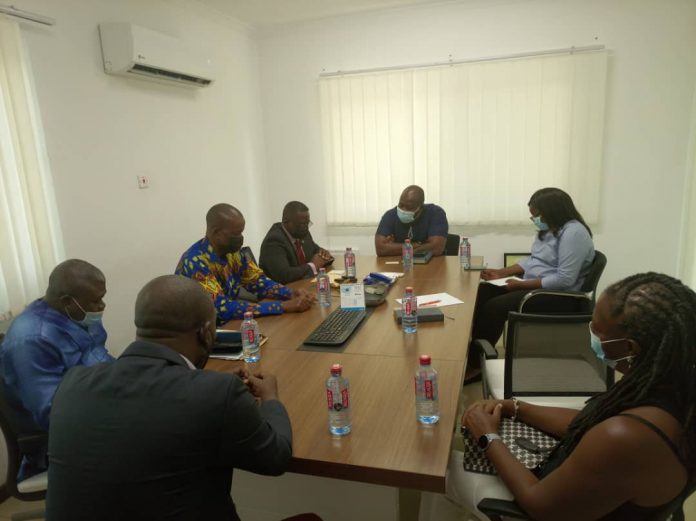 Ghana Olympic Committee President Ben Nunoo Mensah and the Executive Board today April 14, 2021 paid a visit to Tiger Holding limited holders of the brand, “Cocoa from Ghana” to Commensurate with them following the demise of their CEO, Henri Wientjis and former spokesman Joost Bellaart.

The visit was to also introduce the current executive board of GOC to the company and to inform them of plans outlined for Tokyo 2020.

Ben Nunoo Mensah said” Uncle Henri had a vision for Ghana sports where he served as a source of inspiration for many youth who had the passion for sports”.

As sponsors of GOC, Cocoa from Ghana supported GOC during the Winter Games with $25,000 to Ghana’s sole representative Akwesi Frimpong and his technical team.

Even though Cocoa from Ghana highlited GOC failures in the past to account for funds disbursed to it during Rio 2016 and other events, they still believe there is an opportunity to work together.

C.E.O of African Tiger Holding limited, Imoro Sulemana expressed his appreciation to the GOC delegation for the visit and congratulated them for their election to serve again on the committee.

“We will look into the partnership an work out something in order not to dime the vision of Mr.Henri who had a clear plan for sports development using Cocoa from Ghana brand”. Mr. Imoro Indicated.

The Ghana Olympic Committee and Cocoa from Ghana signed a one-year partnership agreement in 2016, and later signed a letter of intent to renew their partnership in 2017.

The Partnership was to committed the two bodies to a new and improved, multi-year contract, from 2017, through the Tokyo 2020 Olympic Games, which is expected to bring immense benefits to the olympic movement in Ghana, including technical, psychological, kitting, and the headline sponsor of the Ghana Olympic Committee, through the Tokyo Olympic.