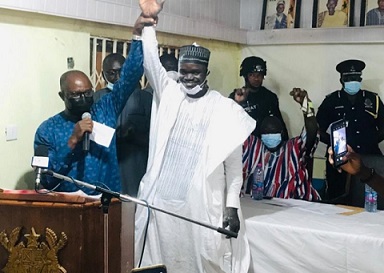 Mr Robert Dawuni Yaja, the President’s Nominee for the position of the Municipal Chief Executive (MCE) for Gushegu in the Northern Region, has been endorsed by Assembly Members of the area.

All the 35 Assembly Members of the Gushegu Municipality voted in favour of Mr Yaja to confirm his nomination.

In his acceptance speech, Mr Yaja, a Teacher by profession, expressed gratitude to the President and the Assembly Members for the confidence reposed in him to serve the area.

He gave the assurance of working hard and in accordance with the President’s vision of transforming the country to ensure that Gushegu Municipality benefitted from government’s projects and policies.

Alhaji Shani Alhassan Saibu, Northern Regional Minister, who addressed the Assembly Members prior to the casting of the confirmation ballots, said the Nominee was highly competent for the position and would evenly represent the government at the local level to continue its transformational agenda.

Mr Musah Issah, the immediate past MCE for Gushegu pledged his support for the new MCE saying “The job is demanding but with hard work and resilience, you will succeed in bringing the needed development to the area.”