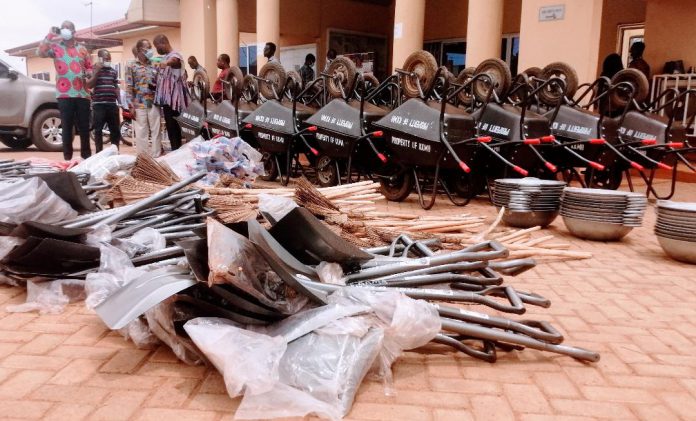 Mr Joseph Kwesi Gbeze, Presiding Member of the Kpone-Katamanso Municipal Assembly has advised the four Zonal Councils within the Municipality to step up the fight against poor sanitation practices in the municipality.

Mr Gbeze made this revelation after the Kpone-Katamanso Municipal Assembly donated some sanitation tools to the four zonal Council in the Municipality as part of broader measures to domesticate the “Let Accra work again,” sanitation Campaign initiated by the Greater Accra Regional Minister.

The Presiding Member noted that days, the days where Assembly members would have to visit the Municipal Head Office in Kpone for sanitation tools are over.

He mentioned that every assembly member should visit their various Zonal Councils to access the sanitation tools when organising communal labour in their respective electoral areas.

Mr Gbeze further explained that poor sanitation practices were having some negative impact on the Municipal Assembly’s finances saying the Assembly was investing huge money which could have been used for developmental project into fixing sanitation problems a situation he said was very challenging.

The Presiding Member further cautioned the various Zonal Council representatives to take very good care of their share of the tools.

He, however, expressed gratitude to the Municipal Chief Executive for his timely intervention. ‘Let work to make Kpone-Katamanso clean for all”.

As part of the Kpone must work again campaign, Mr Solomon Tettey Appiah, the Municipal Chief Executive Officer for Kpone-Katamanso, flanked by some assembly members and the Presiding Member, distributed sanitation tools to the four Zonal Councils in Kpone.

Mr Appiah at the handover ceremony in Kpone-Katamanso stated that the gesture was to domesticate the Regional Minister’s vision to ensure Greater Accra Region as whole works again.

He said the initiative was also in conformity with President Nana Addo Dankwa Akufo-Addo’s pledge to make Accra the cleanest city in Africa.

Mr Appiah stressed that the Municipal Assembly under his leadership would work in line with the Regional Minister’s vision, saying he was a man full of action and needed the support of all well-meaning Ghanaians to achieve the target.

He added that the tools were procured to ensure that sanitation challenges were dealt with in the municipality.

He advised the various Zonal Councils to take very good care of the tools to ensure it served the purpose for why it was procured.

“We would soon launch the Kpone MCE Sanitation Day in the municipality,” he said.