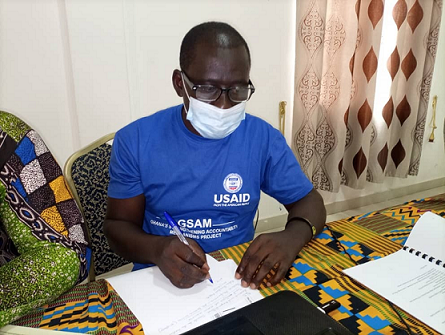 Mr Samuel Atidzah, Executive Director of GOSANET Foundation, a health NGO in the Adaklu district has said though malaria was preventable and treatable, half of the world’s population still lived at risk of the disease.

He therefore called on all stakeholders to Marshall Forces to eradicate malaria from the world in an interview with the Ghana News Agency in Ho as part this year’s world malaria day celebration.

The theme for the day was “zero malaria starts with me campaign” movement and “draw the line campaign.”
Mr Atidzah said according to the Ghana Health Service (GHS), malaria had reduced drastically in the country and the GHS revealed that in 2012, eight people died everyday of malaria, while only one person died every day of the disease in 2020.ⁿ

The Executive Director quoting the GHS said malaria mortality rate among children under five years also decreased from zero point six (0.6) percent in 2012 to zero point one (0.1) percent in 2020.

He told the GNA that the GHS and other stakeholders had reached millions of people in the country by providing them with long lasting insecticide treated mosquito nets in a bid to prevent the disease as it was a deadly disease and appealed to people with signs of it to go to the nearest health facility for treatment.

He said his organization was using funerals, community gatherings and community information centres to disseminate and educate people in the Adaklu district on the treatment and prevention of malaria.

Mr Atidzah appealed to Assembly members and opinion leaders in the district to lead the people in their communities in cleaning their surroundings.

He advised people in the district that as their contribution towards the eradication of the disease, they should always sleep under the insecticide treated mosquito nets freely distributed to them.

“Do not forget that zero malaria starts from you and me so let us play our parts effectively,” he advised.