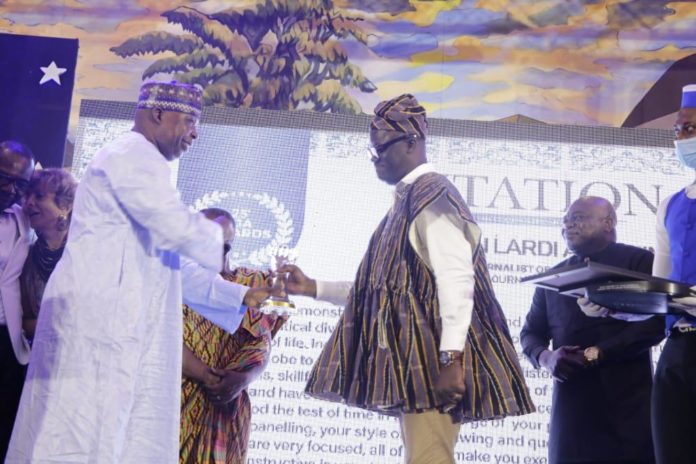 Mr Anyenini, also a legal practitioner and the host of Newsfile on Joy News, also won the Democracy and Peacebuilding Award.

The event, organised by the Ghana Journalists Association (GJA), was on the theme, “COVID-19 and Credible Presidential and Parliamentary Elections: The Media Factor”.

Mr Anyenini in his remarks expressed gratitude to the GJA for the honour done him.

He also expressed gratitude to all who had contributed in diverse ways to enhance his success.

He said the media played an important role in the country’s democracy and therefore, journalists must not allow themselves to be bullied by any one

“During the elections, when for some reasons someone asks you to bring your recorder for it to be destroyed, do not give it to them. Let them know that if you are in the wrong, then they should report you to the police,” Mr Anyenini said.

The other awardees from the GNA are: Mr Albert Oppong Ansah – Science, Mr Prosper Koursoh – Health and Mr Caesar Abagali – Sanitation and Hygiene.

Madam Raissa Sambo, a Ghanaian Times Reporter, was adjudged the Most Promising Journalist of the Year.

Citi FM was named the most listened to English Radio Station in Ghana.

Mr Kojo Oppong Nkrumah, Minister of Information, encouraged journalists, especially as the nation headed towards the December 7 polls to continue with the excellence and responsibilities that they had held especially for example during the COVID-19 issues in this country.

He also urged them to interrogate matters that had to be interrogated ahead of the election.

Mr Affail Monney, President of the Ghana Journalists Association (GJA), said the Association believed that the media had a crucial role to play in ensuring credible elections at all times and the prevalence of COVID-19 must not in anyway be allowed to put shackles on that quest.

“We, however, need the support of other election actors such as the Electoral Commission (EC), political parties, security agencies and civil society organizations to help us achieve credible elections in December,” he said.