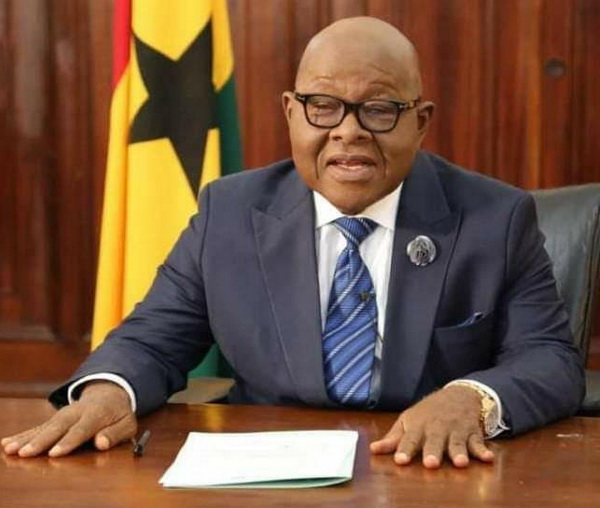 Former Speaker of Parliament and Chairman of Africa Public Policy Institute (APPI), Hon. Prof. Aaron Michael Oquaye has stated emphatically that he hasn’t endorsed anyone as the 2024 flagbearer of the ruling New Patriotic Party (NPP).

He issued a Rejoinder to some publications suggesting that he (Michael Oquaye) said “Bawumia should be NPP’s 2024 Flagbearer”.

According to him, he granted an interview on Monday, May 17, 2021, to Okyeman TV’s host, Raymond Kumah and that interview was not about flagbearship of the party.

He stated that: “It centered on the NPP and what it stands for from ancient to modern, including Ghana’s Digitisation Progress. It must be emphasized that no comparison was made with any of those interested in flagbearship. It featured President Kufuor prominently on specific areas. No endorsement was suggested to me and I did not endorse anybody.”

Hon. Prof. Michael Oquaye also stated that when he was asked about the progress of Ghana’s digitization initiative under Dr. Bawumia, he answered by indicating categorically that, “It will be fantastic if we are able to continue with this digitization, automation and ICT. This complements the good work being done by Hon. Ursula at the Ministry of Conlmunications.”

According to him, he considers Dr. Bawumia as an ‘A Plus’ performer, but so are other NPP stalwarts, including Hon. Kyerematen, Dr. Akoto, Hon. Ursula, Dr. Prempeh.

“These are all excellent material and I will continue to say so in context. The Trade Minister is today a global authority on International Trade, Business and Investment. The headquarters of the Africa Trade Organisation, etc., exemplify him. Also, Dr. Akoto complements development in our agro-based industry for our food both home and abroad. His work stands unprecedented in Ghana. The brilliance of Hon. Ursula in the application of ICT for national development must be spoken about, entirely without prejudice. She is also ‘A plus’. Similarly, Dr. Prempeh is managing the challenges in the Energy Ministry just like he did in the Education Ministry and we are all looking up to him and other brilliant stars which we the elders are proud of.”

The Rejoinder also has it that, similarly, while the he was going to deliver the Re Akoto Lectures, some well-wishers called to say his involvement might be misinterpreted as support for one particular aspirant but undeniably, the story about the good NPP tradition must be told.

He stated that, “we should be able to extol the President’s men and women to show what the NPP is doing and is capable of. If the NPP fails to tell the world about the great achievements of President Akufo-Addo and his Ministers, we shall be heading for disaster in 2024.”

He however cautioned the party against pitching  people against each other saying, “Let us not be pitching people against each other and I will never do this. To have misconstrued and misrepresented the comment on Ghana’s digitization progress as an indication for a particular individual to be the Flagbearer of the NPP in 2024 is not only inaccurate but a complete falsehood.”

He called on the general public to disregard the misleading publication in the media.