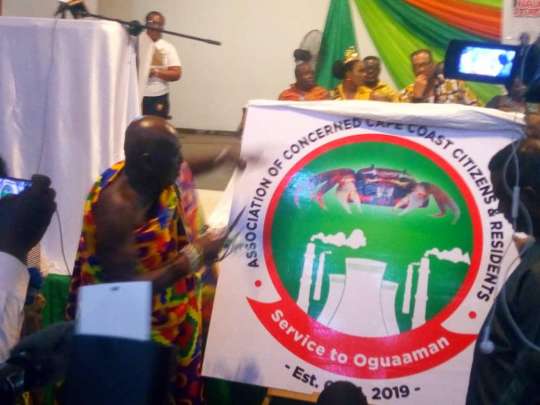 The Association of Concerned Cape Coast Citizens and Residents has initiated steps towards facilitating the pace of development within the Metropolis and beyond.

As part of the initiative, the Association is seeking greater transparency, accountability and probity from duty bearers whilst mobilising the available human resources to accelerate development.

Among other things, the group will collaborate with the Traditional Council and the Metropolitan Assembly to support youth employment and counselling, tourism and education.

It will also organise seminars and symposiums and sustainably scale-up public education on environmental cleanliness and attitudinal change.

It has patriotism, social accountability, open-mindedness, integrity, discipline and perseverance as its hallmark.

Speaking at the inauguration of the group, Mr George Justice Arthur, the General Secretary, said the Association believed that the Metropolis had had great untapped opportunities for decades leading to the current deplorable state of Ghana’s first capital.

“It is our firm view that the declining situation in the Metropolis can be reversed if adequate measures are taken to address them.”

Mr Arthur announced that the group was determined to resuscitating all the historical national monuments and assets abandoned for years to beautify the City.

Professor Jophus Anamoah Mensah, an Advisory Board Member of the Association, described Cape Coast as a pale shadow of itself and rallied the concerted efforts of all to remedy the situation.

He said the past narrative of Oguaaman had always been beautiful and pleasing and eulogised the many leaders, who through their selfless efforts, made the Metropolis a great one.

“But now, the walls of Oguaaman are broken, we have moved from a vibrant fishing industry to one that does not support and promote sustainable livelihood for residents and citizens – from being good custodians to mere spectators.”

“Now, we see high unemployment rate due to collapse of industries, disregard for authorities, declining access to education and high poverty rate” he said.

Prof Anamoah Mensah urged all to collectively rise and build a beautiful town that befits its status as a former Capital City.

Osabarima Kwesi Atta II, Omanhen of Oguaa Traditional Area, on his part, called for attitudinal change and renewal of minds saying “negative attitudes had stalled the progress of the town.”

“Let’s change our antagonist and divisive deeds, maligning, gossips and hatred and support the authorities to bring development to the area.”

He pledged his unflinching commitment and support for the Association and advised the leaders to keep the fire, passion and energy burning to reach their targets and achieve their good intentions for the town.