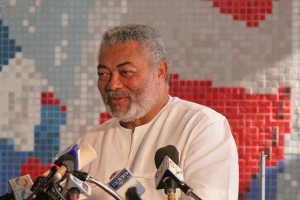 Dr Vanderpuije is the Member of Parliament (MP) for Ablekuma South.

The former President, who on Thursday was captured on social media as having snubbing Dr Vandepuije when the latter attempted to greet him while on his way to the Parliament to listen to the immediate past President John Dramani Mahama deliver his message on the State of the Nation to the August House.

Former President Rawlings as a guest of Parliament with former first lady Nana Konadu Agyeman Rawlings attended the inauguration of the House.

Legislators from both sides of the House walked to Rawlings and the spouse and exchanged greetings with them.

The former President who sat at the right side of the would-be Speaker, walked to the minority side featuring National Democratic Congress lawmakers and sat next to Dr Vandepuije and chatted heartily with him , shaking his hands to the surprise of many.

The House went into an uproar, as cameramen clicked their shutters repeatedly.

When the former President stood up to walk back to his seat, some legislators applauded, while others looked on bemused.