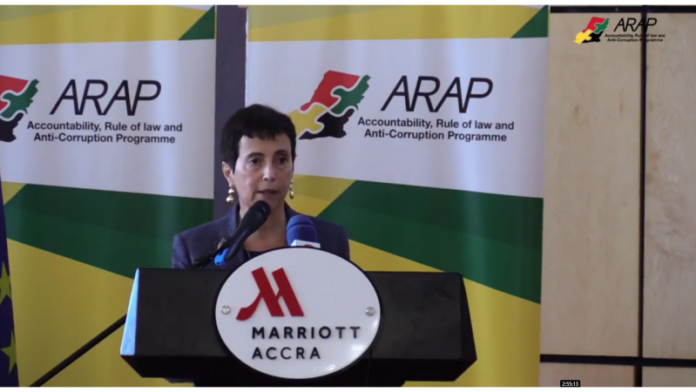 Ms Diana Acconcia, the European Union Ambassador to Ghana has said the fight against corruption can only be won with strong independent institutions, together with strong political will from the very top to pursue it.

Ms Acconcia was speaking at the closure of a four-year Accountability, Rule of Law and Anti-corruption Programme (ARAP) in Accra.

The 20 million European Union ARAP project began in 2016, through an agreement between the EU Delegation and the Government of Ghana, with implementing institutions like STAR-Ghana, the National Commission for Civic Education (NCCE) and FIIAPP, a Spanish Public Foundation.

The Programme was designed to promote good governance and support national reform to enhance accountability and strengthen anti-corruption efforts across the country.

“Political will is key but without strong institutions to enforce the law, even the most motivated leaders have blunted weapons,” she added.

She said critically, ARAP supported the engagement of the involved institutions with their peers at the international level.

She said it was aimed at exchanging experience and best practices from institutions not sharing necessarily the same system of Law and Administrative framework.

The Ambassador said; “we will continue to work together with all Anti-corruption stakeholders to strengthen democracy and accountability in Ghana.”

Ms Acconcia said the Union intended to step up cooperation on democratic governance and rule of law on both continents.

This includes accountability and transparency of public institutions, independent and impartial justice, corruption, and transitional crimes as well as trafficking in human beings.

She said, “I feel that with ARAP we have contributed to a stronger, more participative democracy in Ghana and I am very proud of it.”

She said the Programme has made certain achievements including improvements in enforcement, environmental governance, digitalization and institutional Strengthening.

Ms Ana Sanchez, ARAP Team Leader said the Programme has encouraged the use of new technologies and digital platforms as a necessary tool promoting efficiency, effectiveness, and transparency of the public bodies in the daily management system.

She said the Programme has tirelessly worked in collaboration with national stakeholders to support and drive forward national policy framework.

Mr Samuel Akuamoah, Deputy Chairman Operations of the NCCE said the Programme has supported the Commission to develop a civic education strategy.

He said the Commission also received a Cinema Van for the civic education activities in the remote areas.

He assured the EU and other stakeholders that the resources pumped into the Commission would not go waste.

ARAP provided technical assistance and capacity development to key institutions in the criminal justice sector to promote good governance, enhance accountability and ensure compliance with the Rule of Law.

The Programme worked directly with the Judicial Service, the Office of the Attorney General, the Commission for Human Rights and Administrative Justice, the Legal Aid Commission, NCCE, Ghana Police Service, the Economic and Organised Crime Office and the Environmental Protection Agency