Professor Kwabena Frimpong-Boateng, the Minister of Environment, Science and Technology Innovation, on Monday asked Ghanaians to be safety conscious and change their attitudes for a safe environment for the wellbeing of all. 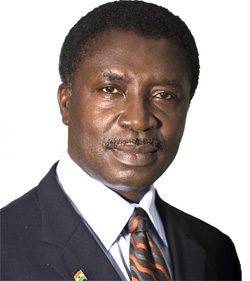 He said the survival of human kind was at much risk against the background of how careless people’s attitudes had been toward the environment over the years.

“If you look at what is happening to the environment, it is something like a self-inflicted injury,” the iconic cardiothoracic surgeon stated at a meeting with staff of the Environmental Protection Agency (EPA) during a working visit to the Headquarters in Accra.

He explained:“We have to change our attitudes; there must be a change like President Akufo-Addo said, we should not be spectators but be active participants”.

“And when you find animals and fish dying from our empty forests and dead rivers, it is only a question of time that it will reach the human beings.”

All the surface and ground water were also drying up, thus affecting the survival of the citizens in the surrounding communities, the Minister pointed out.

Prof Frimpong-Boateng said the negative attitudes of people, for instance, through mining, illegal logging, deforestation, erection of unauthorised masts, had led to many of the challenges facing the country today.

He said the issue of gas and gas stations and how gas cylinders were used and kept at home were bigger issues of concern, but more education would need to be carried out among the citizenry on the proper use and handling of such products to avoid disaster at homes and within the communities.

“I must stress that the problem is not with the gas stations alone, it is also about our attitude towards safety and improper handling of gas facilities in our homes,” he explained.

Speaking with so much passion, Prof Frimpong-Boateng said: “As Ghanaians we are more religious and we go to church so we should know that if you litter you are sinning against the environment and if you read the Bible in Revelation 11: 18, it indicates that when Jesus comes back he is going to judge those who have polluted the earth”.

He reminded the EPA officials that they had a major role to play in leading the crusade of keeping a safe environment.

He said the issue of Gender and the Environment; where women had to survive through the burning of charcoal, could also be solved through the provision of appropriate technology to the by-products of crops such as groundnut husks and saw dust, coconut husks, maize stocks and leaves, to stop the cutting down of trees to burn charcoal.

“We have a better way of helping women who make charcoal in a place like Sissala in the Northern Region. The groundnut husk and saw dust, maize stocks and leaves could be turned into charcoal.”

Mr John Pwamang, the Acting Executive Director of EPA, said the Agency was set to collaborate with the Government to improve the environment through partnership with stakeholders, such as the Ghana Standards Authority and Town and Country Planning.

He said the Agency was also ready to develop a five-year strategic plan of activities as it awaited the first State of the Nation Address by the President, which would give the direction as to how the country would move towards its general development.

Mr Pwamang said the issue of plastic waste and illegal mining were major on EPA’s agenda and that more efforts were being made to expedite actions to address them.

As part of the Minister’s visit, a staff durbar was held where the Minister interacted with the staff of the Agency to know their peculiar issues and challenges.