The Kingmakers and Council of Elders of the Toh/Tovie Clan of Mafi Adidome and associated communities have announced the enstoolment of a new chief for Adidome.

The new Chief was enstooled under the stool name Togbe Kwasinyi Agyeman V. The enstoolment was done in Adidome over the weekend.

After going through the customary and traditional processes, the Chief was outdoored and presented to the larger family/clan and the entire Adidome township in a colourful procession through the principal streets ending with a durbar at the Market Square. 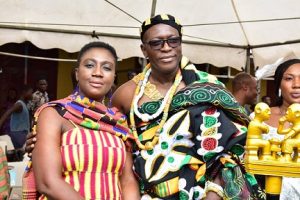 He is oldest son of the late Hlortator Seth Kwabla Fiagbenu (the immediate past head of the Toh/Tovie Clan of Adidome), and the grandson of the legendary Togbe Kwasinyi Agyeman III, the late Fia of Adidome.

The new Chief who was born and raised in Adidome lived with his grandfather when he was a child and is privy to chieftaincy affairs and accustomed to the issues of the family, clan, and entire township.

Speaking at the function, the new Fia of Adidome pledged to make the development of Adidome his focus. He said, “I look forward to working with the Community leaders, District Assembly, NGOs, Government and Businesses to bring the town, which is the capital of the Central Tongu District, back on track as the vibrant town it used to be during the reign of Togbe Kwasinyi Agyeman III.

He also said during his grandfather’s reign, the town attracted the interest and attention of Dr Kwame Nkrumah’s government which led to the establishment of institutions such as the State farms, Workers Brigade, Animal Husbandry, and several other public and private institutions ranging from agro-related entities to health institutions such as Ameyi Farms (Gbedemah Farms) to the Adidome Hospital.

“The goal of my grandfather who lived from 1897 to 1973 was to make Adidome one of the most attractive towns in the Volta Region”. This is possible.

He said, “My focus is Education, youth development/empowerment and business development”.

He promised to implement a responsive and accountable governance in an open-door leadership style that allows all key stakeholders to work together towards the new era of prosperity for the people of Adidome and the entire Mafi State.

The new Fia said he will work towards the establishment of a scholarship fund for brilliant students from Adidome and its surrounding towns, whilst making skills development and youth employment his focus. 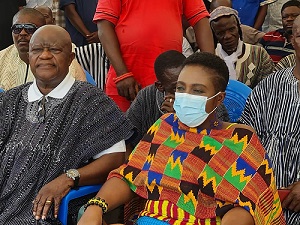 Speaking at the outdooring ceremony, Togbe Anorba Sasraku IV, the leader of the Middle Wing (Dome) of the Awanutorwo, who presented the new Chief to the public, pledged the support of the Mafi Traditional Council, and stated that they were willing to do what it takes to make him succeed.

Commenting on the enstoolment on behalf of the Head of the Toh/Tovie Clan, a principal member of the Council of Elders and the Kingmakers, who is a former Deputy Minister of Communications and former CEO of Ghana Export Promotion Authority, Dr Gideon Quarcoo, said the Council of Elders and the Kingmakers of the Toh/Tovie clan was happy to see the traditional rites and enstoolment done in a peaceful manner following all due processes.

He said, he looked forward to seeing the community develop under the new Chief as the entire family and clan support him.

The Toh/Tovie Clan is one of the biggest clans in the Mafi Traditional Area and believed to be one of the first settlers in Mafi after separating from their brothers from Anlo and Ave, and after escaping and migrating from Nortsie