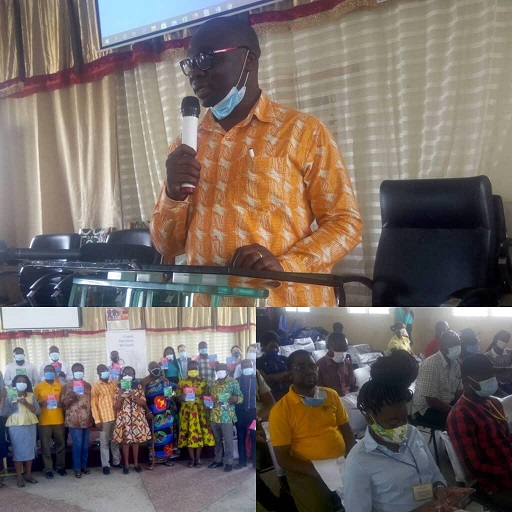 He said data had taken centre stage of the global development discourse, and the United Nations (UN) 2030 Agenda for Sustainable Development, left no doubt that data was crucial to helping societies make real and meaningful progress.

Mr Amewu said this when he launched Solid Waste Management and Gender-Based Violence APPS under the Citizen-Generated Data Project in Ho, an initiative of GSS with support from GIZ.

The APPS – “Let’s talk and Clean up Ghana” aims to provide a platform for the citizenry to report cases of gender-based violence and indiscriminate dumping of wastes to help authorities have accurate data regarding such issues and take pragmatic measures to address them.

The Citizen-Generated Data will serve as a complementary data source to the GSS traditional data source and its usefulness will be tested with two pilot projects in the thematic areas of Gender-Based Violence and Waste and Sanitation.

The two projects will be piloted in three selected districts across the main ecological zones of the country and their implementation will heavily rely on district-level partners in the form of “District- level Technical Teams.”

Mr Amewu said the Sustainable Development Goals (SDGs), made up of 17 goals, 169 targets and 231 indicators created incentives for closing global data gaps and collecting new data to help achieve a transformative and universal agenda, improving well-being and leaving no one behind.

The Statistician said Citizen-Generated Data were data that people or their organisations produced to directly monitor, demand or drive change on issues that affected them, adding that it was actively given by citizens which provided direct representations of their perspectives.

“All human activities and events around us, have data inherent in them; they are either derived from data, or potentially generate data. Sometimes consciously but often times we are oblivious to the relevance of these data. Citizen-generated data is a problem-focused type of data that can take many forms,” he added.

He said the Apps had come at the right time as they would add to GSS resolve and efforts to strengthen the national statistical system to be responsive to national data needs to drive policy and programming, adding that GSS would document all learnings from the collaborative work between them and shared the results with communities.

Mr Amewu who deputised for the Government Statistician, Professor Samuel Kobina Annim, said data needs in countries all over the world were changing rapidly to address intertwined global and local challenges, ranging from climate change to the spread of infectious diseases and the effects of instability and vulnerability, policy action must be informed by reliable and timely data.

The Statistician noted that data revolution offered governments and national statistics offices a welcome opportunity to produce more useful data by generating data from new sources that could complete and strengthen, though not replace official statistics.

Mr Amewu said technology held great potential for data production and usage, thus it must be deployed for administrative processes, enhance possibility of generating data from them in real time.

“I must admit this collaboration has once again demonstrated our abilities as a people and we at Ghana Statistical Service (GSS) are pleased to be working alongside all of you, especially, the District Technical Team for the Citizen Generated Data (CGD) project,” he stated.

Mr Prosper Pi-Bansah, Ho Municipal Chief Executive (MCE), said the country was facing a challenge of non-existence of credible data which were prerequisite for effective and efficient work delivery.

He said the various sectors of the country’s economy would win to witnessed massive development and positive change if the country continued to improve on its data system.