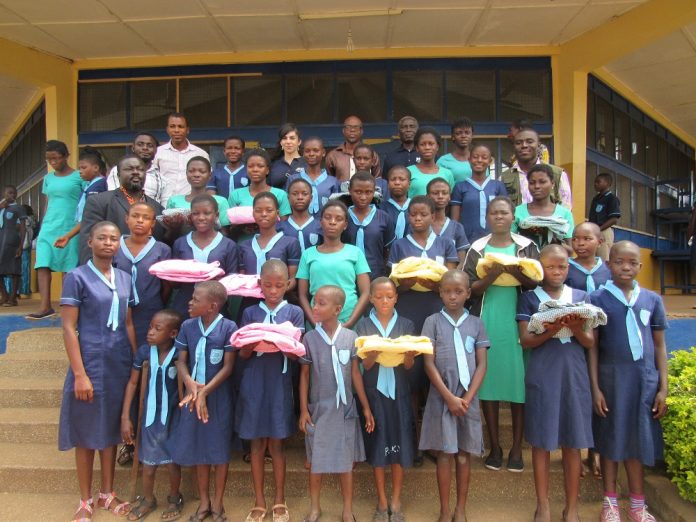 Thirty (30) underprivileged girl-child at the Demonstration School for the Deaf, Mampong have benefited each from school uniforms, house dresses and a sponsorship fund for the payment of their Parent Teacher Association (P.T.A) levies for one academic year. This came to fruition under a partnership project of African Development Programme (ADP) and Holt International Children’s Services (HICS)
The beneficiaries were identified under a project titled, Child Interventions for Protection and Educational Development (CIPED).

A four month intervention that seeks to address socio-economic challenges that deprive children of their full potential whilst in school.

Speaking at the presentation ceremony, the Acting Executive Director of ADP, Mr. Charles Othniel Abbey, noted that this intervention has become necessary due to challenges that families of these beneficiaries go through in ensuring their wards stay in school throughout the expected period. He was hopeful the support will go a long way in boosting their morale to learn and compete with their male counterparts and in the process promote quality education and gender equality under the Sustainable Development Goals (SDGs).

He commended the staff for the services they were offering to the vulnerable children in the midst of several challenges they articulated as hampering the smooth running of the school. He emphasized on the fact that, the visit was to make deliveries of the items and tighten the knot of relationship ADP and Holt has with the school.

The Senior Executive of Holt International Children’s Services, Africa and Haiti Programs, Mr. Charles Abbey said poverty is multidimensional and also delves into lack and want in the education sector. He stressed that “these uniforms and sponsorship package makes a difference between poverty and progress.” He assured the students that, Holt International hopes to contribute modestly towards their education. “The collective effort of Holt and other organizations like ADP will contribute to make vulnerable students comfortable as we co-share in the same vision to make the world a loving and secure place for children ”, he added.

The Programs Coordinator at Holt International Children’s Services, Africa and Haiti Programs, Mrs. Danielle Peebles made the presentation of the school uniforms and house dresses to the pupils. Mr Akuffo Kpeli, the Assistant Headmaster of the School, on behalf of the students received a cheque payment for the (P.T.A) levies and thanked the partners for their support.

Some participants and beneficiaries who spoke after the event said it is one of the best things they have seen in years and that if well to do individuals, CSO, groups and corporations were doing this on regular basis, their pressing needs would have been taken care of by now.

ADP is a Social Development NGO based in Accra, near WestHills Mall and Holt International Children’s Services is a US-based Charity organization headquartered in Eugene, Oregon with operations in fourteen (14) countries across the world. The project, CIPED runs from June-September 2017 in various institutions in Eastern and Central Regions