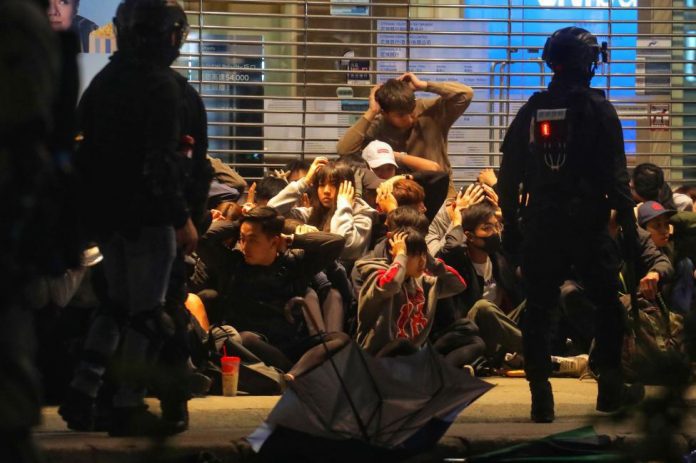 Hong Kong police said around 400 people were arrested after an approved protest march of tens of thousands of people turned violent on the first day of the year as police deployed tear gas and protesters vandalized buildings.

Senior Superintendent Ng Lok-chun said during a press conference Wednesday the arrests were for charges of possession of offensive weapons and unlawful assembly after protesters ignored police warnings to disperse.

He said the police-approved procession began peacefully around 2:30 p.m. but about 90 minutes later protesters began to vandalize an HSBC branch bank at Hennessy Road, causing police to attempt arrest.

Police called for back-up after the arresting officers were surrounded and protesters began to throw hard objects, he said. In a release, police said a petrol bomb was thrown.

Ng said teargas was deployed to disperse the crowd and at 5:30 p.m. the procession organizer, Civil Human Rights Front, was contacted to call the procession off due to public safety concerns.

Civil Human Rights Front, which said over a million people participated in the procession, rejected Ng’s explanation and accused police of escalating the violence when officers fired tear gas at the crowd, stating tensions over the arrests at the bank had eased.

“On the first day of year 2020, the police dismissed the first licensed assembly of the year with absurd excuse,” the pro-democracy group said in a statement. “Hong Kong government have shown its unwillingness to listen to the voices of the mass infringing the right of assembly of Hong Kong citizens.”

As night fell, violence escalated as five HSBC locations were vandalized and set on fire. A petrol bomb was also thrown at a Starbucks, the South China Morning Post reported.

“Having given warnings in vain, police have conducted dispersal using tear gas and a Specialized Crowd Management Vehicle,” police said in a statement. “Police warn all rioters to stop the illegal actions, dispersal and arrest action will be taken.”

The police erected barricades and swept from area to area making arrests of those who would not disperse, Ng said.

Protests first erupted in Hong Kong in June over a now-withdrawn extradition bill that would have allowed for some refugees of Chinese law to be transferred to the mainland to face Communist Party courts.

However, following accusations of police brutality, the movement evolved into a wider pro-democracy push that has persisted for seven months.