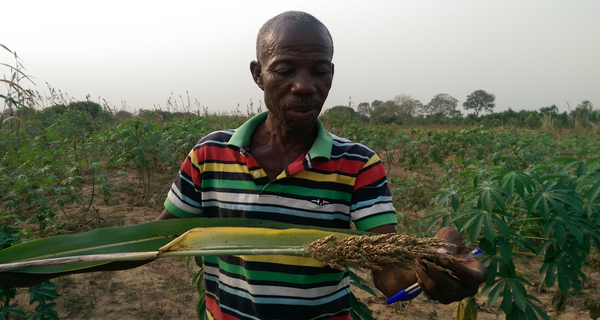 Small holder farmers in and around Ada Afiadenyigba, a community near Ada have appealed to the Ghana Irrigation Development Authority and the Ada West District Assembly to consider developing a drip irrigation system as way of helping them continue with the farming activities especially during the dry season.

Our farming is rain led, the end of the raining season means stop work of us. This is our biggest headache, a local cassava, pepper and tomato farmer, Jonathan Agbetiameh laments.?? According to him, ?the drip system is less costly than bringing a canal or any other thing.?

The farmers made the call when representatives from SEND-GHANA met with them to explore ways of solving their challenges. The meeting which was facilitated by Ayongo Foundation, a local Focal Non-Governmental Organisation (FNGO) was held at Ada Afiadenyigba.

If we have a drip system for each farmer who cultivates an acre of farm land, and the cost is about GH? 2,000, so for twenty farmers in a row, with a tractor, it means within one year the farmer can pay back. GH? 20,000 can take care of about ten farmers. It will be less costly than bringing a canal. If that can be replicated as it is being done in other countries, we will be okay, Agbetiameh believes.

Micro irrigation systems are often used in farms and large gardens, but are equally effective in the home garden or even for houseplants or lawns. He argues that, they are easily customizable and can be set up even by inexperienced gardeners. Putting a drip system into the garden is great do-it-yourself projects that will ultimately save the time and help the plants grow. It is equally used in landscaping and in green cities.

The system is not new in Ghana as some vegetable famers have started making use of the system.

An article on a local Ghana News Agency (GNA) website on 25 January 2013, reported that World Vision International (WVI) Drip Irrigation Project at Gorugu and Dua in the Bongo District of the Upper East has curbed rural urban migration that has been a major problem in the area.

Upper East is a region which has only one rainy season in a year, coupled with the infertile nature of the soil.

It quoted Madam Akolgoma Atia, 35 as saying that, ?she had been able to support her family through the proceeds from the sale of vegetables including paying her two children?s school fees.