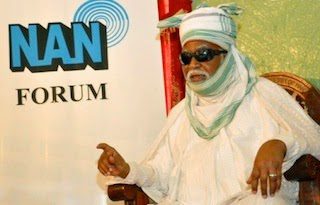 The Emir of Kano, Ado Bayero, is dead. The emir died on Friday 6 June in the morning and is expected to be buried on Friday according to Islamic rites.

The spokesperson to the Kano State governor, Baba Dantiye, has confirmed the death of the emir.

Alhaji Dr. Ado Abdullahi Bayero (CFR, LLD, JP) became Emir of Kano in 1963. He was a former ambassador to Senegal.

He was one of the strongest and powerful emirs in the history of the Hausa land. He was renowned for his abundant wealth, maintained by means of stock market investments and large-scale agricultural entrepreneurship both at home and

He?s the second most important Muslim leader in Nigeria.

Bayero was born to the family of Hajiya Hasiya and Abdullahi Bayero and into the Fulani Sullubawa clan that has presided over the emirate of Kano since 1819. He was the eleventh child of his father and the second of his mother. At the age of seven, he was sent to live with Maikano Zagi.