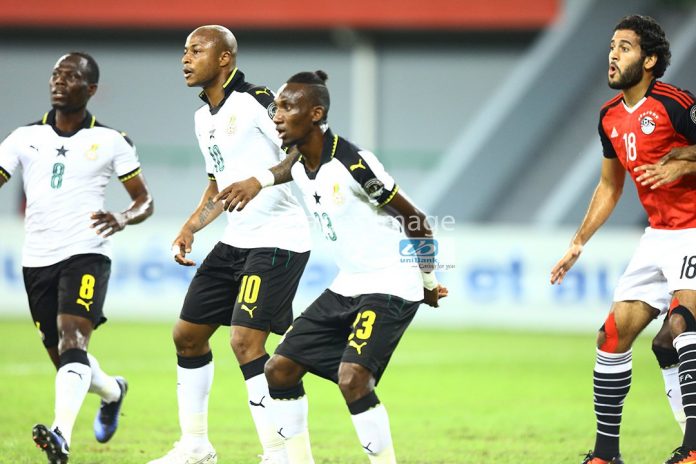 Ghana will face DR Congo in the quarter-final of the AFCON after finishing as runners-up to Egypt following a 1-0 loss to the Pharaohs on Wednesday.

Roma’s Mohammed Salah scored the only goal of the game for the Pharoahs early in the first half, firing into the top corner from a free-kick with the Ghanaian keeper, Razak Brimah stranded.

The Egyptians kept the ball well for the rest of the half and restricted the Black Stars to speculative shots from outside the box and half chances. The Black Stars had made four changes from their previous game, a win over Mali, with Jordan Ayew, Mubarak Wakaso, Thomas Partey and Frank Acheampong dropping to the bench.

The Black Stars had already qualified for the knockout stages but the Egyptians needed at least a point to be sure of qualification and despite a cagey start, grew into the game after Salah’s goal. Ghana’s most dangerous player so far at the tournament, Christian Atsu was well marshalled by the Egyptian defence who clearly recognised his threat.

Andre Ayew proved to be Ghana’s outlet for much of the half but his crosses from the left were well dealt with by the experience Egyptian keeper El Hadary. Things went from bad to worse for the Black Stars as captain Asamoah Gyan had to be taken off with an injury.

Jordan Ayew was brought on but struggled to make an impact as the half wound down.

The Black Stars started the second half brightly but the Egyptians contained the early threat. Ghana showed more attacking intent in the second period as they looked to maintain their unbeaten run in the tournament.

Christian Atsu was put through on goal with a superb pass from Harrison Afful but the winger was flagged offside as his shot went wide.

Atsu had lifted his game but the Egyptians were looking quite comfortable at this point and again were limited to shots from range, with Agyeman Badu having a go as well.

Jordan Ayew beat a couple of defenders to create space for himself but his shot was pushed out for a corner by El Hadary. Grant made a couple of changes including bringing on striker Bernard Terkpetey for his competitive debut to no avail and the Egyptians picked up their third straight win over the Black Stars.