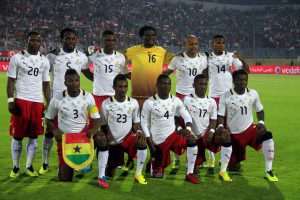 The Black Stars were paired in Group D in a draw held yesterday and many pundits have termed Ghana’s group as the “Group of death” however, the play-maker, Tetteh believes with the right technical approach and focus from the team, will advance Ghana to the next stage of the continental showpiece.

In an interview with the GNA Sports, he said “we can survive the group because we have the qualities and we believe in ourselves. The other teams will also see us a tough side and knows that, Ghana is a difficult team to beat’’

According to him, Ghana needs to beat the best to be counted as such and that with hard work and determination, the Black Stars will win their games.

The Black Stars will open their AFCON campaign against Uganda on January 17, before they take on Mali four days later and square up with Egypt, who are making their return to the contest after missing three finals on January 25.
The opening and final matches will be held at the Stade de l’Amitié in Libreville, whilst Stade de Port Gentil hosts the third place match.
The quarter-finals will be played in each of the four venues with the semis taking place in Libreville and Franceville.