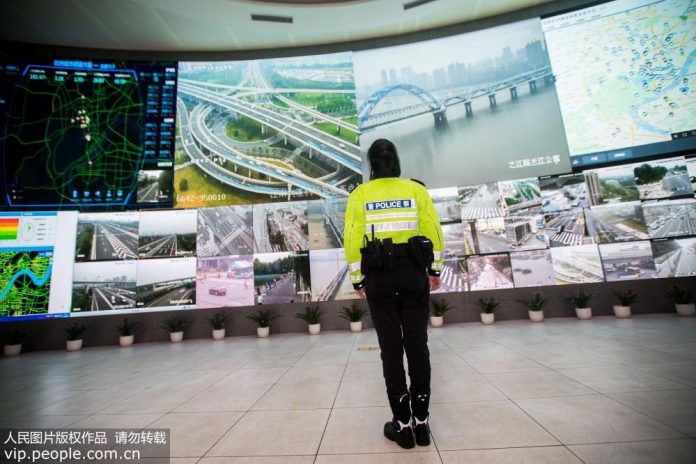 The city of Hangzhou’s traffic efficiency has seen substantial improvements a year after it introduced its “City Brain” project, with an artificial intelligence (AI) hub that uses big data to help it “think” and make decisions better.

The program started in October 2016 with a vision of building Hangzhou into a smart city with the ability to regulate itself and interact better with its human occupants.
Hangzhou is the capital of east China’s Zhejiang province and the first city in the world to manage its public affairs with AI technology assistance.
Some of the latest beneficiaries of the program are the local traffic police, since the “City Brain” has started helping them maintain traffic and respond quicker to traffic accidents.

“The City Brain can detect accidents within a second, and we can arrive at the site in 5 minutes,” said Zheng Yijiong, a traffic police officer and the first police officer in China to control the traffic with an AI partner.

The AI hub offers real-time analysis and deployment advice for smooth traffic flows in an area with more than 9 million residents, and manages traffic lights at 128 intersections, saving 15.3% in waiting time at pilot areas. And the City Brain controls traffic lights automatically at more than 100 intersections, cutting travel time on elevated highways by 4.6 minutes.

The system has reported more than 500 traffic accidents in the downtown area daily, with an accuracy of 92%, greatly improving traffic police’s efficiency.
In Xiaoshan District, an ambulance used only half the time that it used before to arrive on the scene because of the smart traffic light control technology.
The traffic control is just the first step in City Brain governance, said Wang Jian, chairman of the Alibaba Group’s Technology Steering Committee, one of the project developers.

In the future, the City Brain will become an important part of the infrastructure to drive the city towards sustainable development, based on Internet, computing and data, Wang added.

Hangzhou’s experience has been duplicated in other cities, including Suzhou, Quzhou and Macao, which are looking for ways to cope with their growing traffic congestion.

Hangzhou has become the biggest beneficiary of mobile internet-enabled social services, with smart cities developing rapidly. All you needs to live there is a smart phone and, statistics show more than 95% of the supermarkets and convenience stores in the city using Alipay, a mobile payment service of Alibaba. Over 98% of local taxis accepting mobile payments.

Hangzhou residents can now pay for more than 60 public services, vehicle and health care with Alipay.

Nearly 600 Chinese cities are working on a smart city approach and, with the development of big data, Internet of things and AI, China is expected to see an upsurge in smart city building.

The market value of Chinese smart cities is expected to exceed 6 trillion yuan ($904.87 billion) in 2017 and 18.7 trillion yuan in 2021, Shenzhen’s Qianzhan Industry Research Institute has predicted.