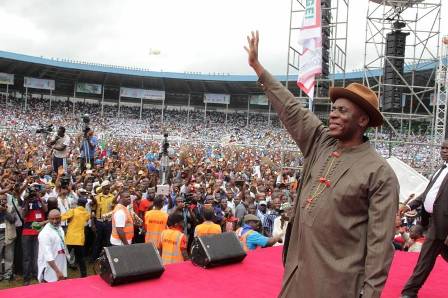 It was celebration galore in Part Harcourt as pupils of Banham Primary School, Aggrey Road, were during the week moved to the UNESCO World Book Capital Model Primary School situated at Moscow Road in the Rivers State capital. The formal commencement of academic activities in this world-class school ranked as one of the best in sub-Saharan Africa marks the fulfillment of yet another promise by the State Governor, Rt. Hon. Chibuike Rotimi Amaechi. The UNESCO World Book Capital School is one of the newly constructed 20-classroom school blocks built across the State by the Amaechi administration as part of its efforts to expand access to education by pupils across the State. The State Government had on 16th January 2015 commenced the movement of pupils from old schools to the newly constructed one-storey 20-classroom blocks which Amaechi promised to deliver before handing over power on May 29.

Pupils of Banham Primary could not contain their joy upon seeing the facilities at the UNESCO World Book Capital School, their new place of study. The school is well equipped with the state-of-the-art facilities like the sick bay, library, music class, science laboratories, and ICT, etc.

The Head Teacher of the school, Mrs. Ibiene Ereme, said that she was short of words to describe the kind of facilities in the school. She said that the teachers and pupils can now settle down to teach and learn as the conducive environment provided by the State Government will make teaching very easy and learning fun. Mrs. Ereme, who was full of commendation for the State Government, promised that the teachers would do their best in bringing up properly educated children in the new environment.

On their part, pupils of the school also lavished praises on Governor Amaechi for providing a conducive learning environment for them. They said that the new school cannot be compared to where they were coming from, observing that the new environment would make them to study harder and aim high in life.

Chairman of the State Universal Basic Education Board (SUBEB), Sir Ali Oruitemeka, said the pupils were moved to the new structure because the environment is more conducive for learning. He stated that the upsurge in the enrolment of pupils into Government-owned schools in Rivers State necessitated the construction of 20-classroom blocks across the State. The schools are well equipped with books and e-books. They are being used by the State Government to promote reading culture among pupils and students. Every pupil of the schools has a reading period as pupils are made to pick a book, read and summarise during the book review segment.

It would be recalled that UNESCO, moved by the revolutionary feats of Governor Amaechi in the education sector, crowned Port Harcourt the 2014 World Book Capital City in April 2014, beating ten other great cities that include Oxford in England and Moscow in Russia. Governor Amaechi thereafter promised to build a world-class primary school to commemorate the feat ? a promise which he has now fulfilled with the formal opening of the UNESCO World Book Capital School, Port Harcourt.

Amaechi?s feats in the area of education that moved UNESCO to choose Port Harcourt as the World Book Capital City are unequalled by any African leader, either in the past or present. His administration has churned out over 500 Model Primary Schools and 24 Model Secondary Schools that are termed to be better than some universities in Africa. It has also employed about 13,000 teachers, offering free education with free books as part of a strong vision to promote and sustain activities that would make promotion of literary activities and make literacy a staple in the State?s agenda.