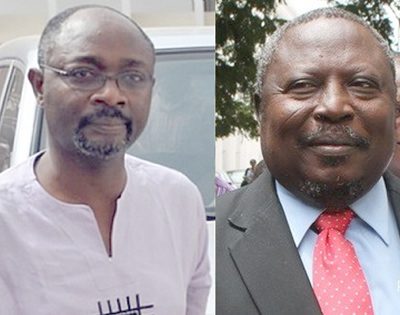 Former Attorney General, Martin Amidu, may not get the opportunity to orally examine Alfred Agbesi Woyome in the GHc 51 million judgement debt saga today [Thursday] according to a private legal practitioner, Yaw Oppong.

Martin Amidu, was scheduled to interrogate the embattled businessman over how he intends to pay back the GHc 51 million judgment debt unlawfully paid him.
But on Wednesday Mr. Woyome’s lawyers filed two writs in the Supreme Court seeking a review of an earlier decision that would have allowed Mr. Amidu to examine Alfred Woyome.

Commenting on the development on Eyewitness News, Mr. Oppong said the latest application may hold the court up.

“When that is brought to the notice of the judge, who was hearing the original case may then find himself or herself held up pending the final determination of the interlocutory appeal before the court,” Mr. Oppong stated as he noted that some Judges find that once such a writ is filed and brought to their notice “their hands are tied up by it.”

One of these applications was praying the Supreme Court to review the ruling of the court presided over by Justice Enin Yeboah a week ago that permitted the oral examination.
woyome-in-court-3

The second application is a request for a stay of proceedings to enable the court to determine the motion for review.

Mr. Woyome was earlier ordered by the Supreme Court to appear in court for an oral examination over the controversial judgement debt saga.

The order followed an application filed by Mr. Amidu, praying the Supreme Court to allow him to orally examine Woyome, after the Attorney General (AG) discontinued the process to examine him.

Justice Anin Yeboah, who gave the ruling argued that the applicant had the right to do that because he personally came to court to get a judgment to have Mr. Woyome pay back the GHc51 million cash he received as judgment debt.

The judge also indicated that, the application was granted because there was no evidence of execution before the court by the AG.

Mr. Amidu’s action followed a move by the Attorney General’s (AG) office, led by the Minister for Justice, Marietta Brew Appiah-Oppong, to discontinue an oral examination of Mr. Woyome, despite serving an earlier notice to do same.

This forced Mr. Amidu to file the application in court, in which he even alleged that President Mahama had ordered a discontinuation of the case because Mr. Woyome had threatened to expose officials of government and the NDC who benefited from the amount.

Alfred Woyome was paid GHc 51 million after he claimed that he helped Ghana to raise funds to construct stadia for purposes of hosting the 2008 African Nations Cup.

However an Auditor General’s report released in 2010 said the amount was paid illegally him and subsequently, the Supreme Court in 2014 ordered Mr. Woyome to pay back the money after Mr. Amidu challenged the legality of the payments in court.

Following delays in retrieving the money, the Supreme Court judges unanimously granted the Attorney-General clearance to execute the court’s judgment ordering Mr. Woyome to refund the cash to the state.

In 2016, the AG’s department, led by the Minister for Justice, Marietta Brew Appiah-Oppong, decided to discontinue an application to examine the one-time NDC financier orally because it was considering a possible settlement with the defendant.

But this compelled Mr. Amidu to return to court to seek his ultimately successful order to examine Mr. Woyome.