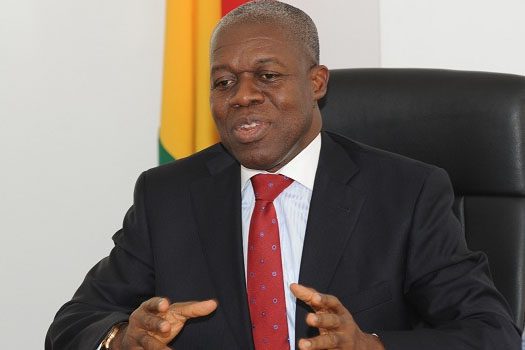 He said the Vice President is also God fearing, humble and a forthright person and the type of leader that Ghana needs.

Apostle Badu-Woode said this when Vice President Kwesi Amissah-Arthur joined hundreds of worshipers at the Pentecost International Worship Centre at Asokwa in the Ashanti Region.

He described the Vice President as someone who through humility has not separated his office from God and this is the reason why President Mahama chose him as his running mate again.

Apostle Badu-Woode also chastised the behaviour of some “Men of God” who have become election prophets and urged them to stop creating fear and panic in the society.

He described such prophets as charlatans, reminding them that Ghana is a democratic state and not a theocratic one.

He said those calling themselves prophetic pastors should allow state institutions to work and not hijack democracy.

Apostle Badu-Woode said the will and choice of God for a leader would manifest through the pattern of voting and not from pastors, especially those claiming God has revealed to them who would lead Ghana.

He said such pastors should stop manipulating politicians by saying ‘God has revealed to them’ and that they should allow the Lord to speak through the ballot adding that voting is a divine way that God appoints his leaders because God is democratic.

He said such prophecies put fear in the people adding that any calling without listening leads to disaster.

He prayed for the government and the people of Ghana for a peaceful election.

Vice President Amissah-Arthur on his part thanked the church for the welcome given them.

He said it only God who directs us to work for his ultimate good.

Vice President Amissah-Arthur also gave thanks to God for how far he has brought the country and and expressed gratitude to God for his life.

Later, the Vice President and his entourage also joined the Ebenezer Miracle Worship Centre at Ahenema Kokoben to worship with them.
Vice President Amissah-Arthur addressing the congregation called for peace and unity in the country.

He said people would continue to mention Ghana among nations that believe in the democratic style of governance.

He said it is God who appoints kings and not men, hence the need to vote for President John Mahama in the December 7 elections for continuity.

He said renewing the mandate of President Mahama for another term would enable him to continue with his good works in terms of the transformational and infrastructural developmental agenda for the country.
On his part, Prophet Ebenezer Adarkwa Yiadom popularly known as “Prophet One” thanked the Vice President for worshiping with them despite the earlier rain

He prayed that God would grants the heart desires of President Mahama and his government.
He also prayed that Ghana would continue to enjoy peace and stability so that the progress being made would be sustained.