Assistant coach of the Black Stars Maxwell Konadu, has said the team’s progress to the next stage of the 2017 Africa Cup of Nations, was achieved amidst very difficult conditions, in the host city Port-Gentil. 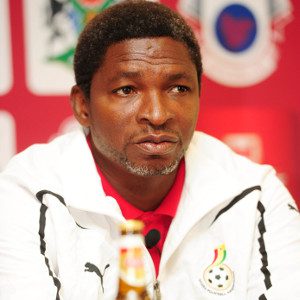 Speaking to the media, the coach said, they had initial challenges with accomodation, which was not up to the best condition, whilst the pitch at the stadium was worse.

“We have a situation here, where the training pitches, are even better than the pitch for the competition it self.

“It was a very difficult situation, which we have to bear with. I am happy the players were able to make do with the situation and they have so far given us the best results.

“We have played two matches and got six points, which has qualified us for the next stage of the competition and the players must take the credit for surviving under these difficult conditions.” He stated.

Coach Konadu, was confident the performance of the team will improve in the next game against Egypt because the players have learnt from previous mistakes.

According to the coach, the team will seek to make amends in the next game, by ensuring a sustained performance through out the match.

“We hope to improve on goal scoring in the subsequent games as we seek to go all the way to the finals”. Coach Konadu noted.