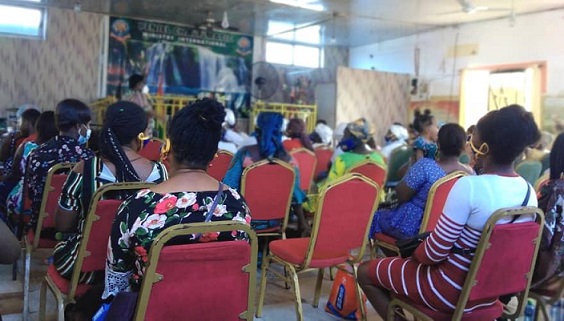 Bornwin Foundation, a Community-Based Organization (CBO) in collaboration with the SOS Children’s Villages Ghana and the Social Welfare Department to sensitise women in Tema New Town on the impact of Sexual and Gender-Based Violence.

The day’s community sensitisation programme, brought together women and teenage mothers, was on the theme: “Child Protection and Sexual and Gender-Based Violence”.

It was intended to create awareness among the women on sexual and Gender-based violence, its negative impact and the need to report such cases.

Mr Joshua Agudah, Founder and Chief Executive Officer, Bornwin Foundation, was geared to enhance the knowledge of the women in the community on acts of sexual and Gender-Based Violence including; domestic violence, which is prevalent in the community.

He said the foundation had over the years built a close partnership with organisations like the SOS Children’s Villages Ghana, Domestic Violence and Victims Support Unit (DOVVSU) of the Ghana Police Service and the Department of Social Welfare to nip the phenomenon in the bud.

He noted that his outfit was further partnering opinion leaders in the predominantly fishing community to strategize in the fight against gender-based violence, domestic violence, and teenage pregnancy prevention in the community.

These local community leaders, he said would be engaged to ensure access to information and to properly identify the risks of sexual, domestic and gender-based violence.

He said subsequently to educate the community on its impact as domestic violence particularly denied survivors of their fundamental human rights and undermined their human development goals.

Chief Inspector Sabina Ama Blay, Officer in Charge of Outreach and Counselling, Tema Regional DOVVSU, said the unit provide free services to the public and protect the rights of the vulnerable against all forms of abuse-physical, sexual, emotional, psychological amongst others.

Thus, she called on women to report all forms of sexual and gender-based violence to DOVVSU.

She explained that, even though most cases went unreported, the first step in prevention of such abuses was for victims to report such incidents and perpetrators to authorities for investigation and further action.

Mr Dziedzom Owusu-Agbe, Project Coordinator, SOS Children’s Villages Ghana, speaking to the Ghana News Agency (GNA) at Tema on the side lines of the sensitisation programme, said SOS was focused on the sustainability of project initiatives, which necessitated the collaboration to help eliminate domestic violence in the area.

“We have engagements with the children on sexual reproductive health right issues and it was important that parents were enlightened on the tricks of perpetrators to be able to identify such acts and report same to the authorities,” he said.

He urged women and children to report such acts which were detrimental to their development.