The Deputy Governor of Imo state and the running mate to Gov. Anayo Rochas Okorocha of the APC in the upcoming 2015 elections, Prince Eze Madumere, has told the people of Mbaike (Mbaitoli and Ikeduru LGAs) that the presidential candidate of the All Progressive Congress, APC, in the 2015 general elections, Gen. Muhammadu Buhari represents the best thing in the offing for the Igbos and their political future. 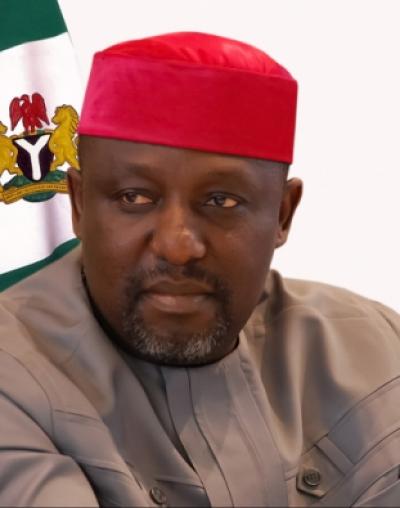 The deputy governor made the statement on January 3, 2015 while addressing a massive crowd of women who gathered at Lake Malinda, the sprawling country home of the deputy governor named after his mother, Lolo. Malinda Madumere.
According to the deputy governor, the propaganda making the rounds that the former Head of State is a tribalist and an Islamic extremist is false, a figment in the wired minds of the opposition strategists who are working with their fifth columnists to blackmail the APC and its presidential candidate, having seen that Gen. Buhari is increasingly appearing unstoppable in his journey to Aso Rock under the APC?s banner of change in the 2015 elections.

He stated that during his regime as Nigeria?s military head of state Gen. Muhammadu Buhari demonstrated his disposition and personality as a detribalized nationalist by ceding a greater percentage of his political appointments to the Igbos and Christians in contrast to what is happening now under a Christian southern president. Rather, he described the APC?s presidential candidate as an austere figure of uncompromising discipline whose primary drive is to stamp out corruption and instill a sense of order amidst the chaos and confusion that has brought the Nigerian nation to its knees.

He told over 10,000 of his supporters who cheered as he spoke at his country home that in Nigerians? collective yearning for infrastructural development, security, peace and stability, good roads, qualitative health and education, globally competitive economy, enabling environment for the growth of the private sector and businesses, job creation and human capital development, youth and women empowerment, industrialization and agriculture, effective governance and political inclusiveness, the candidature of Gen. Muhammadu Buhari and his running mate, Prof. Osinbajo, a seasoned technocrat and a legendary icon in the judiciary and academia, represent the most credible alternative for Nigerians.

Speaking about the race to the Imo government house, the number two citizen and chief political strategist to Gov. Okorocha told the APC supporters who gathered to receive their Christmas gifts from the deputy governor from all corners of Mbaitoli and Ikeduru under the banner of Mbaike APC supporters that supporting Gov. Okorocha?s re-election in the coming election is a sacred duty for every Mbaike son and daughter who appreciate good things.
He insisted that based on his sterling record of achievements in all facets of the peoples lives, the governor?s rescue mission administration needs to be given another chance to exhaust its life-changing contents which has taken Imo to a whole new level in the last three years. He informed his APC supporters to a loud cheer that a vote for Gov. Okorocha is a vote for massive Industrialization of the State in which Mbaitoli and Ikeduru will have a fair share of the deal.

According to him, industrialization forms the cardinal point of the governor?s development blueprint for the State after he is re-elected into office for the next four years.
In his address to the over joyous crowd, Prince Madumere, who is also known for his outstanding exploits in political strategy as a field tactician noted that the Mbaike vote is a deciding factor in every gubernatorial election in Imo state. Hence, the massive support and followership enjoyed by the APC among the sons and daughters of Mbaitoli and Ikeduru are clear indication that Gov. Okorocha and the APC will contest with nobody in the coming elections.

The deputy governor also used the occasion to present all the candidates of the APC for the coming election to the people of Mbaike, including the House of Assembly, House of Representatives and the Senatorial candidates of the party in the various political constituencies. The crowd went into a wild frenzy as the No. 2 citizen rolled out his Christmas package of huge material and cash gifts for all the political wards in Mbaitoli and Ikeduru.
In their response, the supporters thanked the deputy governor and asked him to inform Gov. Okorocha and the APC that the Mbaike vote is meant for no other party but the APC and its candidates in the coming elections.