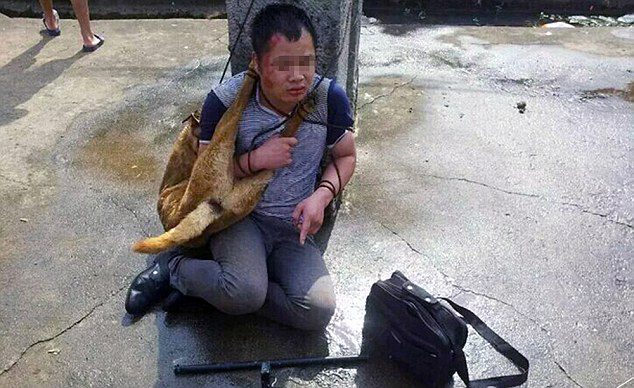 Wuff justice: One of the dog thieves is seen tied to a tree in the Chinese village with the body of one of the animals he allegedly killed

Disturbing images released after the incident showed the two alleged thieves, bloody and restrained by the locals, who tied the dead animals to them. According to reports, the men were caught on June 2 stealing and killing dogs for meat in a village in China?s Hunan province. The other thief is seen slumped against a car surrounded by villagers. The pair were reportedly subjected to a brutal nine hour beating

Later, police reportedly arrived at the scene to free the two men, prohibiting the mob justice. The villagers allegedly demanded 1 million yuan, around $161,000, from authorities in exchange for the two men, otherwise they would not be freed. At around 4 p.m., the villagers reportedly attacked the officers with metal bars and rocks, reported by People?s Daily Online via Daily Mail.

Hours later, public security officers reportedly arrived and calmed the villagers down. The two dog thieves were taken into police custody, and an investigation is underway.