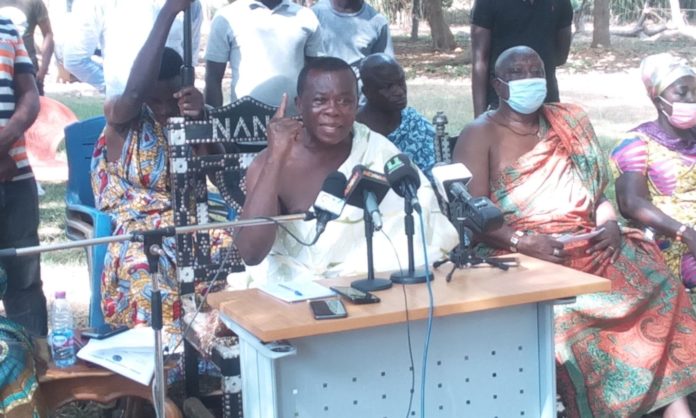 The Drobo Traditional Council in the Jaman South Municipality of the Bono Region on Wednesday held a peace dialogue for political actors and stakeholders in the area to ensure peaceful coexistence.

The event was organised in Drobo under the auspices of Okokyeredom Sakyi Ako II, the Paramount Chief of the Drobo Traditional Area and President of the Council for the Parliamentary Candidates (PCs) and leadership of political parties in the area.

It was to affirm their commitment to peaceful, free, fair, credible and transparent election for sustainable peace before, during and after the December 7 polls.

It was also to inform media personnel, most especially managers and morning show hosts of radio stations in the Municipality, to be cautious about what they broadcast on their shows.

Other stakeholders that participated were the officials and staff of the Electoral Commission (EC) and the National Commission for Civic Education, representatives of the Local Council of Churches, the leadership of the Islamic community and the Municipal Police Commander and senior police officers.

In an address, Okokyeredom Ako II said the area was identified by security experts as one of the political hot spots in the country, hence the need for the engagement of stakeholders ahead of the election.

It was also to declare the stand and preparedness of the Traditional Council to cooperate with the Security Services to prevent lawlessness or any acts of misconduct in Jaman South.

Okokyeredom Ako II pleaded with the Police, the EC and journalists to be neutral, transparent and fair in the discharge of their duties.

He cautioned the political parties to ensure their polling station agents were trained with sufficient knowledge about the electoral laws, rules and regulations and the necessary political ethics to exhibit professionalism.

Okokyeredom Ako II assured that the Council would do all it could to maintain democracy and peace in the area, saying, “we are all brothers and sisters responsible for maintaining peace and security to improve development”.

He cautioned journalists to give fair reportage to prevent any situation that might incite violence through their words, actions and inactions.

Mr Oscar Ampem-Darko, the Municipal EC officer, implored the political parties to train their agents and urged the public to trust the security and keep a distance of 500 metres away from a polling station.

“The EC has no agenda against anybody or political party, we are all seeking to give free and fair elections to maintain our peace and political stability to promote socio-economic progress of the country,” he assured.