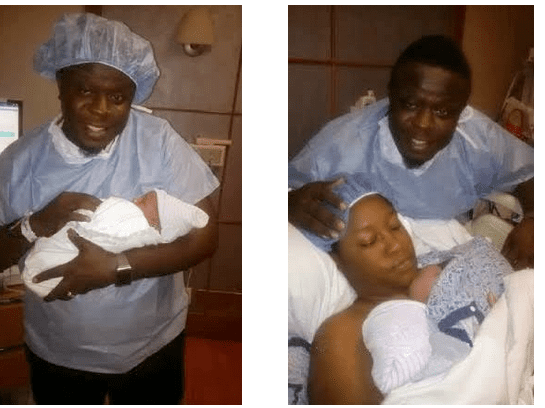 Men usually shy away from participating in maternal and child related activities because they feel it is an issue that concern only women. Meanwhile men make major decisions and take actions which affect women during pregnancy or child care. Deeply immersed in these gender-related tensions are traditions, economic self-interest, and power dynamics, all of which are advantageous to men.

The Technology for Maternal and Child Health (T4MCH) Project organized a community sensitization in 33 communities to discuss socio-cultural factors that affect maternal and child health. It was revealed that, though men exude power and influence in the family and society, most men have little or no knowledge on pregnancy, delivery and child care. Also, men who take the initiative to support their wives during pregnancy, delivery and child care often find society labeling them as weak men. In such instances, we find families of supportive husbands claiming the man has been bewitched by his wife, which leads to abuses meted out on either the man or woman. This shows that women and men in all spheres of life have different opinions about what the role of men are in their families and society, and therefore have difficulties working together during these periods. The project is contributing to the reduction of maternal and child mortalities in 33 health facilities in 9 district and 3 regions of Ghana; Northern, Volta and Upper West Region.

As men do not only influence their own reproductive health but also that of women, their engagement in roles that promote gender equality and discussion on Sexual Reproductive Health and Right (SRHR) at household, community and institutional levels, would contribute the use of their influence and power to champion collaborative decision making between partners, challenge traditional norms and resource support to empower women to access quality health care and skilled delivery.

We mostly ask, can engagement and active participation of men positively influence Maternal Mortality Rate (MMR)? And why isn’t men involved? Imbedded in the situation, lies many challenges confronting men which affect their involvement in Maternal and Child Health (MCH) issues. These issues comprise but not limited to the following;

1. Sexual Reproductive Health and Right: Most men are challenged with understanding their own sexual and reproductive health and rights and most importantly the reproductive cycle of women. This attribute to the many unwanted pregnancies, especially among adolescent, leading to unsafe abortion. Abortion amidst other contributing factors is a major cause of maternal mortality in Ghana. The Ghana Health Service (GHS) annual report, 2016 indicated “Almost 45% of abortions in Ghana remain unsafe and the root cause of most abortion is unintended pregnancy, which occurs when women are unable to time or limit their child bearing.” As men make most decision regarding pregnancy, it is crucial for men especially adolescent to be educated on their sexual and reproductive health and right to support them make inform decisions regarding the use of family planning methods to prevent unwanted pregnancy.

2. GENDER EQUALITY AND EQUITY: Most men cannot comprehend the fact of supporting their wives during pregnancy, delivery and child care. This is out of the result of the gender roles and responsibilities ascribed to men. The inequalities in gender roles and responsibilities make most pregnant women to engage in labor intensive duties such as hawking in the sun or working on the farm, which may cause complications to her during delivery, or lose her life or that of the baby or have life-long implications on the health of both mother and baby. When men understand the need to take up roles to support their partners, pregnant and lactating mothers would have enough strength to safe go through the pregnancy process and care.

3. CULTURAL AND TRADITIONAL PRACTICES: The base of men’s challenges is instituted into cultural and traditional practices in our communities. Laws governing the acts of men and women in most communities causes restriction of actions and decisions of men to indulge and advocate on MCH issues. Men in society are called all sort of names and treated poorly by peers when seen escorting their wives to the hospital or supporting in household chores. The stigma that comes supporting women deter their interest even though they have the interest in supporting their women and would hide to perform this act. Also, traditional practice which see’s the woman giving birth at home as an indication of being a strong woman and not cheated on the husband, allow men to insist their wives deliver at home and seek health care traditionally.

In existence of this challenge and many more, there is an underlining need for the support of men especially in rural areas, to stand to the challenge and advocate for change in certain traditional practices, access to information and support of the women. This has to be a deliberate effort channeled to educate men and garner support from leaders both at the community and national levels.

The T4MCH project gender strategy, Father-to-Father groups implemented in 9 project districts engage men between the ages of 18 to 40 year in discussing issues pertaining to maternal and child health, gender roles and responsibilities of men during pregnancy, delivery and child care. These session facilitated by trained health staff in the use of the T4MCH Father-to-Father manual, is aimed at bridging gender gap, supporting women to access quality health care and contribute to the reduction of maternal and child mortalities. Men, as pivots in the fight to improving maternal and child health outcomes, empowered with MCH information and relevant support from the project, would advocate for changes in negative traditional practices and develop policies with authorities at the local level which will protect and support the pregnant woman and her baby and contribute to attainment of reduction in maternal mortalities in Ghana.