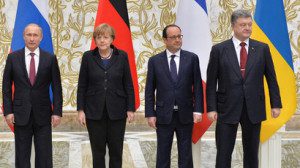 Two members of the Russian lower house of parliament, the State Duma, singer Iosif Kobzon and Valery Rashkin, who heads the Russian Communist Party branch in Moscow, are also on the list. The remaining 14 people are officials of the self-proclaimed republics in eastern Ukraine.

The updated ?blacklist,? which was agreed February 9, was published in the EU Official Journal on Monday and came into force at the time of publication.

Restrictive measures include the freezing of the individuals? assets in European Union countries and an EU-wide travel ban.

Aleksey Pushkov, the chairman of the State Duma?s Foreign Affairs Committee, has tweeted that the new EU sanctions, adopted February 9, are ?going to be contrary to the results of Minsk [peace agreements]. These sanctions will not solve anything, but will complicate the political dialogue.?

Russia?s representative to the EU, Vladimir Chizhov, told journalists that further extension of sanctions would not promote accomplishment of the Minsk agreements on the Ukrainian crisis.

?This will not only give a signal to Russian public opinion and force Russia to return to our own sanctions list, but will dissuade both sides of the conflict from the active implementation of the provisions of the Minsk documents,? Chizhov said.

The EU?s expanded sanctions against Russia come after the successful 16-hour Minsk peace talks between the leaders of Russia, Germany, France and Ukraine, aimed at promoting a ceasefire in Ukraine.

The Minsk ceasefire agreement envisages a complete end to hostilities in Ukraine, which came into force starting from midnight Sunday, February 15, and remains an effective measure to stop bloodshed in the east of Ukraine, where pro-Kiev regular troops and Ukrainian volunteer battalions are fighting with rebel forces. Regular shelling in the region has left thousands of civilians dead.

In turn, Russian officials said last week that Moscow will not disclose the names on its blacklist introduced as a reciprocal measure for the new individual sanctions introduced by the EU against Russian citizens

?In the long term, sanctions against Russia endanger Europe?s security of supply,? observed Igor Sechin, CEO of Russia?s energy giant Rosneft, in an article published in the Financial Times on Sunday Vladimir Sergeev