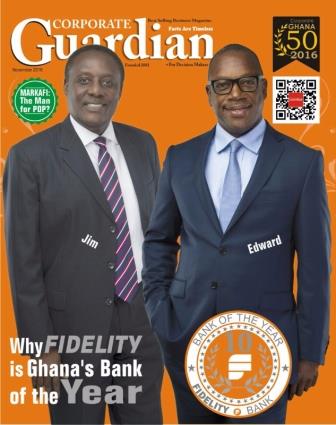 Being in existence since 2002, The Corporate Guardian has prided itself in grace and has carved a niche as one of Africa’s most influential Corporate magazines. 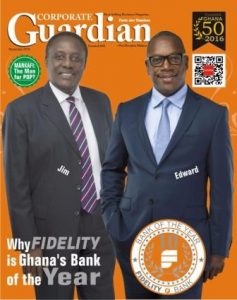 The Magazine which has featured many notable personalities in Africa,  has built a cloud of exclusivity around it’s covers.  This exclusivity makes The Corporate Guardian boast of Corporate Ghana’s most sought-after cover.

Scoring a feature on the November 2016 cover of the magazine is Fidelity Bank Ghana; with Jim and Edward who are the C.E.O and M.D of the bank,  showing off their winning smiles, to commemorate their successes in 2016.

Speaking to Ramatu Dzifa Dakpo – Administrator at The Corporate Guardian, she explained that the magazine’s decision to feature the bank,  was influenced by the successes it had chalked this year,  especially winning  Best Bank Of the Year.