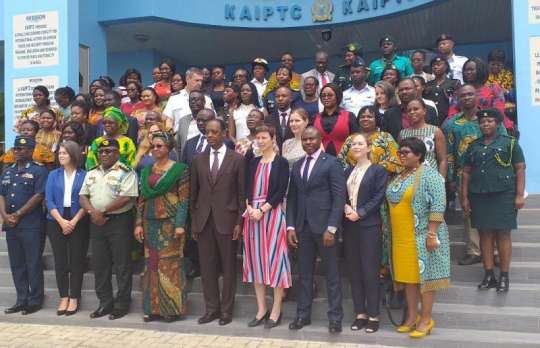 Mrs. Cynthia Mamle Morrison, Minister of Gender, Children and Social Protection (MoGCSP) on Thursday stressed the need for Ghana to position its self well to maintain the relative peace the country was enjoying.

“We need to get the peace message to all and sundry especially the youth to consolidate the relative peace we are now enjoying,” the Gender Minister stated in a speech read on her behalf by Dr Afisah Zakariah, Chief Director of the ministry.

The Minister’s speech was read at the launch of the second Ghana National Action Plan (GHANAP-II) on Women, Peace and Security document in line with the United Nations Security Council Resolution (UNSCR 1325) at the Kofi Annan International Peace Keeping Training Centre in Accra.

GHANAP-II is to build inclusive, secured and peaceful societies especially for women and girls in Ghana, anchored on the tenets of UNSCR 1325.

The Pillars of UNSCR 1325 include participation, protection, prevention, relief, recovery and rehabilitation.
The programme was on the theme: “I am Generation Equality: Advancing Women and Girls Rights in Ghana”.

The occasion coincided with the marking of the 25th year of the Beijing Declaration and Platform for Action that analysed the achievements on gender equality and women empowerment.

Mrs. Morrison noted that even though Ghana was internationally recognized as relatively peaceful, it had pockets of recurrent conflicts that resulted into violent clashes.

According to her, the conflicts revolved around chieftaincy, ethnicity, land and party politicking and crimes such as armed robbery, that negatively impacted the peace and security of women and girls in the country over the years.
The Minister noted that the launch of GHANP II was crucial for the country because of the major elections ahead.

“The Ghana National Action Plan II is critical to the maintenance of both National and International Peace and security, as it provides the opportunity to deal with localized pockets of intra-states conflicts,” she added.

Violence is destructive and disrupts development agenda of societies, she therefore tasked all to embrace peace before, during and after the country’s elections.

Major General Francis Ofori, Commandant, KAIPTC said the launch coincided with this year’s celebration of International Women’s Day which began in 1975 by the United Nations.

According to him, the International Women’s Day was a focal point in the movement for women’s rights, which gave the opportunity to mobilize support to promote the rights of women and girls.

He said despite the various efforts and stories on women’s rights and participation, there were increasing need to secure the gains made in addressing existing challenges and was also important to examine unexplored areas, especially women’s rights, protection and participation within the emerging security situation.

He said KAIPTC remained committed to the Women, Peace, and Security (WPS) agenda adding that the center had identified WPS as the third pillar of their five year strategic plan.

She however congratulated Ghana for being one of the countries that had adopted National Actions Action Plans to implement UNSCR 1325.

“Domesticating the resolution by developing two national action plans (GHANAP I and II) shows a clear commitment to the women, peace and security agenda,” she noted.