Mrs Rebecca Akufo-Addo, the First Lady on Monday, launched the national Malaria Foundation, to lead in the mobilisation of more internal funding for the total elimination of the disease by 2030. 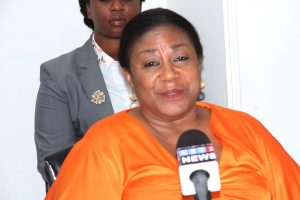 She introduced the Foundation’s 14-member Board to be chaired by Mr Prince Kofi Amoabeng, a renowned businessman, and commended its members for charting a noble course and investing their time, energy and resources in malaria to end it for good.

The formation of the Ghana Malaria Foundation, she said, was crucial to ensuring continuous investment and sustained commitment for malaria prevention and control.

She said although the malaria burden was felt by every segment of the society, the devastating effects were much more heavier on businesses particularly those in the agricultural, banking, industries and manufacturing sectors, making the disease a proximal cause and consequence of low productivity and under-development.

She said the importance of investing in malaria control interventions cannot be underestimated, saying it would help advance broader development efforts by reducing both work and school absenteeism, improving productivity, and fostering business growth.

Mrs Akufo-Addo appealed to stakeholders, especially the business community, to support the efforts of the Foundation by contributing generously towards the worthy course of raising more funding for the sustenance of national malaria control programmes and activities.

The launch, which was part of the activities by the Ministry of Health (MOH) and the Ghana Health Service (GHS) in collaboration with its partners, to commemorate this year’s World Malaria Day in Accra, was well patronised by stakeholders including traditional leaders, students from health training institutions, health professionals, members of the public, as well as the media.

The year’s commemoration on the theme: “End Malaria for Good,” expressed the need to accelerate and sustain efforts to defeat the disease.

Mrs Akufo-Addo said obviously malaria was one of the leading causes of diseases and deaths in Ghana, but a lot of progress had been made over the years, through the tremendous support of the government and its health partners, leading to more than 70 per cent reduction in the death rate, compared to the previously higher rate.

She said there was, however, the need to sustain these gains through more and sustained investment in order to close the existing gap in the funding levels in order to achieve a malaria-free Ghana.

Mr Kwaku Agyeman Manu, the Minister of Health in an address read on his behalf, said malaria remained a public health concern in Ghana as it occurred every year with varying transmission intensity throughout the period, and affecting all ages but had more devastating effect on children under five years and pregnant women.

The theme for the year, he said reflected the vision of a malaria-free world set out in the Global Technical Strategy for Malaria 2016 to 2030, and aims to drastically lower the global burden over the next 15 years.

He said the objectives and goals of the strategy followed the great progress made under the Millennium Development Goals, and it was important to build on the successes and ‘end malaria for good’ under the Sustainable Development Goals.

He pledged the government’s commitment to supporting the programmes in mobilising the needed funding to implement the various proven strategies, and also partner with stakeholder to intensify advocacy in mobilising domestic and external funding, and provide guidance regarding appropriate malaria control policies and interventions.

Let’s be decorous in our discussions relating to development – Ministers

People for Health pledges continuous partnership with communities for development