In line with Government’s vision to industrialise the country through the establishment of factories, the Central Regional Ghana National Fire Service (GNFS) has suggested a national policy to equip at least one fire service station in every district with modern firefighting equipment. 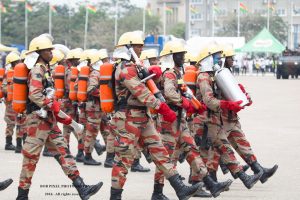 The policy to be dubbed “one district, one well equipped fire station” is to help ensure that all districts have fire stations to enable them respond quickly to issues of fire outbreaks.

He said the initiative will enormously help solve the inadequate infrastructural challenges, adding that out of the 17 fire stations in the region, nine were temporarily accommodated while six had no fire stations.

That means, the nearest existing fire stations had no option than to extend their operational boundaries to cover such areas and this inhibits quick response to fire outbreaks to save lives and properties.

Notwithstanding these challenges, she said, the region has stepped-up fire safety education besides other measures being put in place to reduce fire outbreaks.

In line with this, it has introduced a new strategy dubbed “catch them young” which had helped to extend fire safety education and prevention to more than 3,000 students within the Cape Coast Metropolis.

As required by the fire precaution regulations on premises, it has also broaden its scope to cover government departments, agencies, churches, mosques, hotels and sensitive institutions to benefit from fire safety audits.

ACFO Simpson said the the region was committed to reaching every household with the fire safety messages to guarantee public safety in relation to road traffic accidents and natural disasters in accordance with the mandate and vision of the Service.

She said the region has tackled more than 433 fires and rescued a number of victims trapped in road accidents of which a total of 155 people were injured and 24 lost their lives.

She said the Elmina GNFS station funded by the government has been completed and was being used by personnel.

The Regional Fire Officer said the Command in collaboration with the Awutu Senya East Municipal Assembly and the Department of Urban
Roads has advanced plans to establish an emergency fire response unit under the Kasoa interchange.

ACFO Simpson said inadequate personnel, administrative logistics, low retention of safety fund to facilitate safety activities were some of the challenges they face.

He the Nana Addo Dankwa Akufo-Addo led-Government believes in protecting lives and properties and remains dedicated to working to resolve the challenges in the institution to promote efficiency, transparency and quality service delivery.