In the Netherlands last week, President Barack Obama confessed a fear: ?I continue to be much more concerned, when it comes to our security, with the prospect of a nuclear weapon going off in Manhattan.? 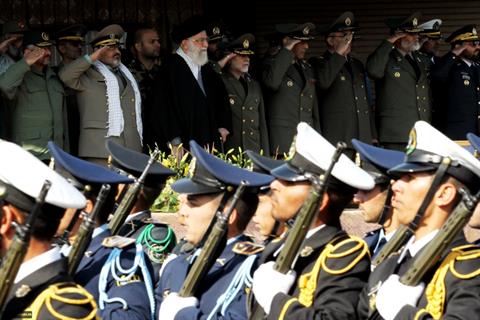 It would be reassuring to think that the president worries about this (when he?s not busy filling out his NCAA brackets), except that he is failing to do the most important thing to prevent such a catastrophe.

The president was speaking at a meeting of the Nuclear Security Summit, a conclave of nations that agree to certain worthy actions, such as converting their reactors from the use of highly enriched uranium to newer versions using low-enriched uranium, beefing up security at nuclear facilities, improving radiation detection at airports and seaports, and so forth. Fifty-seven nations and entities (the EU and U.N. included) participate in this process. But the Islamic Republic of Iran is not on the list.

The most likely scenario (God willing, still unlikely) in which terrorists could threaten Manhattan or any other city would be for the most prolific terror-sponsoring state in the world to obtain nuclear weapons. While we are clinking glasses with Iran in negotiations in Vienna, the U.S. State Department continues to list Iran as a state sponsor of terror. In 2012, Iran participated in planned terror attacks in India, Thailand, Georgia and Kenya. It provided aid and training to the Taliban, Shia groups in Iraq, Hezbollah in Lebanon, and continues to cooperate in various ways with al-Qaida. The president should curl up some evening with the State Department?s country reports. They?re not beclouded by wishful thinking.

The president is another story. Following his ?historic? phone call with Iranian President Hassan Rouhani ? a call the White House was so excited about that it released a photo of Obama holding the receiver of an old-fashioned corded phone while sitting in the Oval Office ? the president expressed his hope that ?our two nations? would ?move beyond? their ?difficult history.?

When it comes to Iran, the president is not above grasping at straws. He twice referred to a supposed ?fatwa? issued by Supreme Leader Ayatollah Ali Khamenei against the development of nuclear weapons. Michael Rubin of the American Enterprise Institute notes that Khamenei posts all of his fatwas on his webpage, but this isn?t among them.

The president can choose to believe in a mythical fatwa, or he can believe his own negotiator, Under Secretary of State for Political Affairs Wendy Sherman. She was asked about the heavy-water nuclear reactor Iran is building in Arak. Heavy-water reactors produce plutonium, a fuel for nuclear bombs. ?We do not believe there is any reason for a heavy-water reactor at all in a civil nuclear program,? Sherman told the Senate Foreign Relations Committee. And come to think of it, why would an oil-rich country like Iran need a civilian nuclear power industry at all? Are there any fatwas suggesting that they?re concerned about global warming?

Four months ago, the U.S. significantly eased sanctions on Iran in exchange for Iranian promises to work out a ?long-term comprehensive solution? to the nuclear problem. From the beginning, Iranian spokesmen have claimed that the agreement acknowledges an Iranian right to enrich uranium. The U.S. denies this. So what are they discussing in Vienna? They don?t say. Last week, a large majority of the members of Iran?s parliament voted to resist any limits on the Arak nuclear plant.

Members of the U.S. Congress, meanwhile, seem worried about Obama?s judgment. Eighty-three senators and 400 House members signed letters to Obama that, while clothed in the language of agreement, actually reflect deep concern about his excessive softness on the Islamic Republic. The letters warn of stiffer sanctions to come if Iran does not fully divest itself of a weapons-building capability. They warn of Iranian stalling tactics, and of the danger that the relaxation of sanctions means ?Iran is open for business.? But most reflective of the anxiety large majorities of the members of Congress feel is their emphasis on congressional prerogatives. Warning that legislative action would be required for any further actions vis-a-vis Iran, the members write ?We must signal unequivocally to Iran that rejecting negotiations and continuing its nuclear weapon program will lead to much more dramatic sanctions.? Translation: Obama has not conveyed such signals.

If Obama does lose sleep worrying about nuclear terrorism, he should drop his naive parlay with Iran. He may fondly envision a new cordiality between old foes. That?s not what they see.