As Kenyans in arid and semi-arid areas starve due to lack of food and water, a new form of drought is sweeping across Kenya’s urban areas as many poor households find it increasingly difficult to access food because of rising prices. 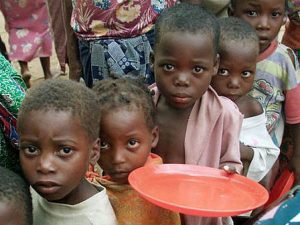 About 3 million people are facing starvation in Kenya, according to the latest figures from the government with the numbers mainly in far-flung areas in northern and coastal regions.

However, these numbers do not include those in urban areas, where high food prices are making many starve, amid declining incomes.

Prices of most basic foods that include cabbages, spinach, sukuma wiki, maize flour, wheat flour, rice, and maize grain have risen due to prevailing drought conditions, making them inaccessible.

The price of sukuma wiki, a poor man’s vegetable, went up last month by 0.06 U.S. dollars for a kilo, from 0.44 dollars in December 2016. During the year, the price has risen by 33 percent making many families forgo vegetables.

Similarly, the price of spinach and cabbage rose 6.7 and 6.3 percent respectively to stand at 0.49 dollars and 0.71 dollars in one month.

The cost of maize flour, on the other hand, has risen by at least 5 percent from 1.18 dollars to 1.24 dollars. The price increases of various food stuff pushed East African nation’s inflation to 7 percent in January, from 6.35 percent.

“I have done away with lunch in my house because I cannot afford it,” Tony Muhati, a stone-mason in Nairobi, who lives in Kayole told Xinhua recently.

With his job being erratic, amid the rising food prices, Muhati said he cannot afford to offer his children three proper meals.

“In the last one week my two children have been taking porridge for lunch and then they return to school, if things are better I buy for them a mixture of beans and maize from a roadside kiosk.”

President Uhuru Kenyatta early this month declared the current drought affecting mainly 23 arid and semi-arid counties a national disaster in bid to call international partners to support the government in mitigating the crisis.

“Support from our partners would complement government’s efforts in mitigating the effects of drought,” he said in a statement issued in Nairobi.

Poor rains in the 2016 October to December season led to the drought conditions affecting the food security of the country’s most vulnerable people.

The Meteorological Department, on the other hand, has announced that there would be delayed onset of the March-May rains, with the erratic nature of the rains compounding the plight of citizens.

“Most of those at risk are small-scale herders in arid and semi-arid lands, where livestock rearing can account for as much as 90 percent of employment and family income,” the UN Food and Agriculture Organization (FAO) said.

In urban areas, however, where thousands have flocked in search of hard-to-come by jobs, the reality of starving is spreading faster.

Henry Wandera, an economics lecturer in Nairobi, noted that rising food prices are a big threat to food security in urban and rural areas, but the issue is currently not being talked about as mitigation measures focus in arid areas.

“In urban areas, hunger is ravaging families not because there is no food to buy, but people cannot afford. The case in worse in rural areas where incomes are very low. If the situation persists, the number of people in need of food aid would reach alarming proportions.”

To cushion Kenyans from high food prices especially of cereals, the government announced it would allow maize importation by licensed millers from as far as Mexico, but would monitor the process to ensure transparency.

In its phase two of drought intervention covering February to April, the government allocated 110 million dollars to cater for various sectors.

National Treasury announced last week it had released the first tranche of 73 million dollars while the county governments have provided 20 million dollars.

As part of its drought mitigation measures, the government through the Agriculture, Livestock and Fisheries announced on Monday that payments to over 12,000 pastoral households under a breakthrough livestock insurance plan, one that uses satellites to monitor vegetation available to livestock and triggers assistance for feed, veterinary medicines and even water trucks when animal deaths are imminent.

“This is the biggest livestock insurance pay-out ever made under Kenya’s Agricultural Risk Management Programme and the most important as well, because without their livestock, pastoralist communities would be devastated,” said Willy Bett, Cabinet Secretary for Kenya’s Ministry of Agriculture, Livestock and Fisheries.

“This insurance programme is not just an effective component of our national drought relief effort. It’s also a way to ensure that pastoralists can continue to thrive and contribute to our collective future as a nation.”

To avert future losses, nearly 2.1 million dollars in insurance pay-outs across six counties will be made by the end of February.

Payments will range from 13.9 dollars per pastoral household in areas that have suffered modest losses to 282 dollars in areas where drought is particularly severe.” Enditem