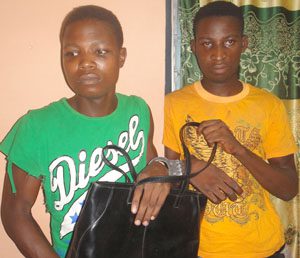 THE POLICE in Kumasi have arrested six people for allegedly dismantling into scraps a stolen Nissan Urvan mini bus   with registration number AS 9506-12, within a period of three hours.

Two suspected robbers, Haruna Misiru, 26 and Basiru Mumuni Awudu, 28, reportedly snatched the bus at Abirem Kenyasi and drove it into a bush at Abidjan Nkwanta on the Kuntenase road to dismantle it.

The police were able to locate the stolen vehicle at Abidjan Nkwanta and so men in mufti were sent to the area which led to the arrest of the men who had almost finished dismantling the vehicle.

DSP Abdulai Iddrisu, SWAT Alpha Commander, said the police saw one Yaw Paul, lurking around an area where the gates and other parts of the bus had been scattered.

Paul, a mechanic, was arrested and he confessed that he was dismantling the bus with the assistance of other mechanics –   Kofi Adama and Bortey Eric ? who were also arrested. According to the police boss, Ayikambe Alou, who bought the bus from Misiru and Awudu were busted.

Ayikambe Alou admitted that he bought the bus at GH?2,000 and that he had given GH?200 as part payment.

DSP Iddrisu said one other accomplice, Dimaria, was on the run and the police were hunting for him. He urged the public to feed the police with information that would lead to his arrest.

DCOP Kofi Boakye, the Ashanti Regional Police Commander, warned mechanics and sprayers to contact the DVLA before changing the colour of any vehicle sent to their workshops.