Tomorrow, Ghanaians will vote in a crucial election. The country will elect 275 parliamentarians and the President of the Republic of Ghana. There are seven presidential candidates in the race, but it is going to be a straight fight between President John Dramani Mahama of the National Democratic Congress (NDC) and Nana Addo Dankwa Akufo-Addo of the New Patriotic Party (NPP). Dr. Papa Kwesi Nduom of the Progressive People’s Party (PPP) has been tipped to push the contest into a second round, but I don’t think so. It’s likely to be a one-touch victory for either the NDC or NPP.

Below are nine main factors, which, in my opinion, will determine who wins in tomorrow’s election. This is a qualitative analysis, and it is my opinion.

This has been an important factor that helps the governing party in Ghanaian elections. The governing party has money to spend. Yes, a lot of cash to splash around. This year, the NDC has the incumbency advantage, the spending power. The NDC’s billboards have dwarfed those of its opponents. The party, apart from almost monopolizing the advertising space in the media, also bought slots on prime-time media programmes to propagate its message. Apart from doling out cash and other goodies to buy votes (which the smaller parties also do in small quantities), the governing NDC also uses state-funded initiatives such as outboard motors for fishermen to canvass for votes. Some people vote based on what they get from the politicians.

President Mahama, especially in his last days of the campaign, was able to visit many areas to campaign because he flew in state-owned helicopters. The incumbent party also controls the police and other security forces. In a country where agencies of the state owe allegiance to the governing party instead of the state, the “system” works in favour of the governing party. The NDC, therefore, has the incumbency advantage in this advantage.

People often talk about incumbency advantage, but they forget that there is an incumbency curse. The general hardships in the country are not blamed on the opposition. When there is no water, it is the incumbent party that suffers. Unemployment, power crises and any other form of disaffection or frustration in the country have a way of affecting the governing party. The NDC will suffer incumbency curse and the NPP will gain from this.

The governing NDC has built its campaign around infrastructure. I wrote a few weeks ago that borrowing money to build infrastructure is something any idiot can do. Anybody can borrow, build and brag. It is not a novelty, but not all voters are sophisticated enough to see governance beyond the building of infrastructure. For some people, development is what they can see or touch. For some of the rural folks, they cannot be blamed. To the farmer in a village near Damongo who wants to transport his farm produce to Tamale or Accra, he cares very little about the exchange rate. Their major concern is the road so if you fix it, they need nothing more. Infrastructure will play an important role in this election. The NDC will benefit from this.

Corruption is the biggest sin of this government. Almost all the campaign messages against the government have an accusation of corruption. The GYEEDA, SADA, SUBAH, Woyome, Bus Branding, Ford Gift Saga and other scandals have dented the reputation of the NDC and their candidate. Ghanaians are generally very tolerant of corruption but corruption will influence the voting decision of some people in this election, especially the middle and the upper classes in the society.

Nana Addo Dankwa Akufo-Addo, on the other hand, has been perceived as incorruptible. He is one of the most vilified politicians in this country. Even though allegations of all sorts thrown at him seem to stick with ease, his opponents do not add corruption to his sins. Contrasting this with his main opponent who has presided over a corruption-friendly government, the corruption factor will favour Akufo-Addo. 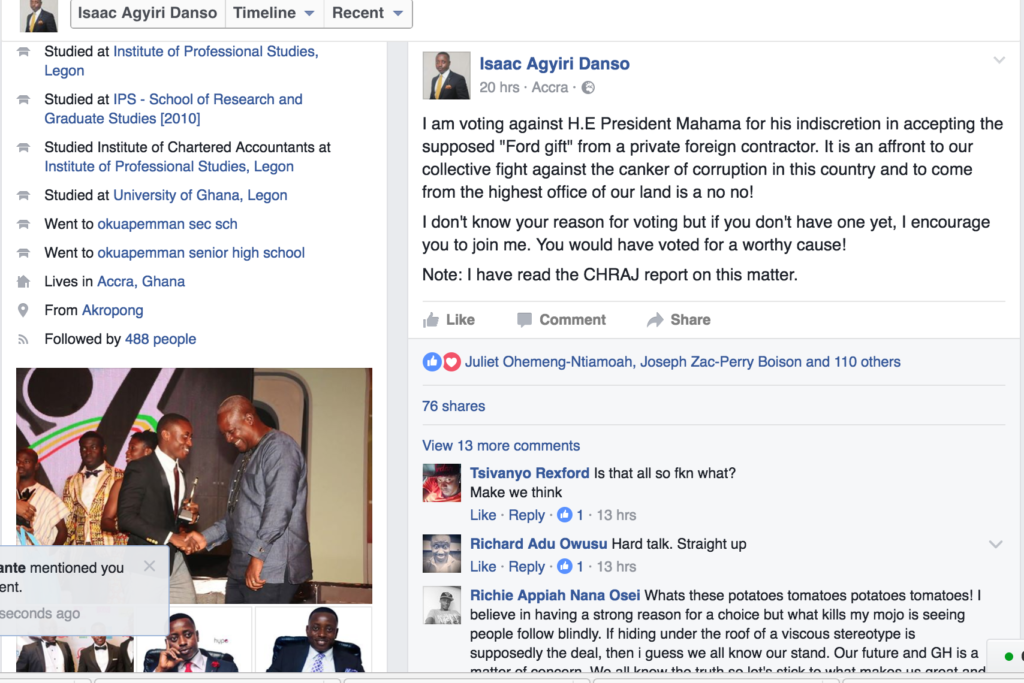 A voter writes on Facebook what will inform his choice

Some people vote based on the appeal of the candidate. The demeanour of the candidates determines how some people vote. President Mahama has a youthful appeal. It is not in vain when he does the Usain Bolt sign and other youthful antics. He appeals more to the “boys boys” and “girls girls” than Nana Akufo-Addo, who looks very serious. While President Mahama tweets and Facebooks, Akufo-Addo recently said in a radio interview that he does not send emails. For this reason, President Mahama has an edge over Akufo-Addo in this regard, even though that appeal has waned since 2012 when Mr. Mahama first appeared on the Presidential ballot paper with “edey bii keke”.

President Mahama has also been projected as a humble man while Nana Akufo-Addo is said to be arrogant. Ghanaians are generally timid. And timidity is sometimes mistaken for humility and elevated above cardinal values such as honesty and trustworthiness in the selection of our leaders. A charge of arrogance can hurt the fortunes of a candidate even if those leveling the accusation cannot prove it. In terms of personal appeal, President Mahama seems to have an edge over Nana Akufo-Addo and those who vote on this factor will choose President Mahama over Akufo-Addo.

In the 2012 election, President Mahama won with a slim margin. He had 50.7% of the total valid votes cast. He had 325,863 more votes than Nana Akufo-Addo. In the history of Ghana’s elections in the Fourth Republic, any candidate who won and sought re-election often dropped in his performances. If this trend is anything to go by, President Mahama’s percentage is likely to drop in 2016.

In 2016, however, he has four years of not-so-impressive governance behind him as president. Not all who voted for him in 2012 may be happy with his handling of the economy, corruption, employment, power, etc. But because Akufo-Addo has not been in charge of these things, someone who voted for him in 2012 may not have a strong reason not to vote for him again. If all factors remain constant, the gap between the two will close because Mahama is likely to lose voters. These are people who may have voted for him in 2012. Those people may either not vote or they will vote for Akufo-Addo. So Akufo-Addo is likely to have the net gain in the fallout from election 2012.

There will be first-time voters, but looking at the general economic outlook and high level of unemployment the new voters (who are mostly the youth) will either shift towards the NPP or the two parties will share the spoils.

As it stands, the NPP is likely to improve on its performance in the three regions of the North. This will be mainly credited to the Bawumia factor and the fact that some people in that part of the country are not happy with the performance of the president in the handling of the Savannah Accelerated Development Authority (SADA). When President Mahama first contested in 2012, a lot of people up north said, it was time for their “own brother” to be in charge. But it seems a number of them are disappointed in their brother. It is not clear how the NDC will fare in the Volta Region, but the party’s fortunes in the north are likely to reduce even though it will still win in that part of the country. The NDC is also targeting one million votes in the Ashanti Region, but it is difficult to say how close the party can get to that target, but from the northern Ghana  situation the NDC is likely to have a deficit in the balance sheet of ethnic politics. This is likely to favour the NPP.

The NPP’s flag bearer Dr. Mahamudu Bawumia appears to have more weight than the NDC’s Kwesi Bekoe Amissah-Arthur. They are both economists but Dr. Bawumia expertise has shaped this campaign to a large extent. His lecture on the economy brought the campaign back on track when it was reduced to trivialities. He adds value to the Akufo-Addo brand and the NPP has featured him in their campaign commercials. His wife, Samira, is arguably the discovery of the 2016 campaign. Nana Akufo-Addo’s running mate adds a lot of weight to the ticket and appeals to the middle and upper classes. The NDC’s Amissah-Arthur, on the other hand, does not add much weight to the ticket of President Mahama so the NPP has an edge over the NDC as far as the running mate factor is concerned.

A majority of voters in Ghana have their votes on autopilot, as Pastor Mensa Otabil puts it. They vote for ethnic and regional reasons. Both the NDC and NPP may have 45% of these votes before they start campaigning. There are also people who vote based on prevailing conditions. These people are not part of the two extremes. Infrastructure and vain promises do not inform their voting decisions. They are the middle and upper-class people. Call them the elite. They are in the minority but they have a say in who wins. The NPP does better in elite constituencies and on university campuses than the NDC. And in this election, the decision of the middle and upper class as well as university graduates who are yet to get jobs is likely to favour the NPP.

From the above analysis, the odds favour the NPP. But the NDC has campaigned very hard in the run-up to the election. The virtual control of the airwaves and the splashing of government projects will sway people. This makes it an open race. But the NPP has more reasons to win this election than the NDC.

The views expressed in this article are his personal opinions and do not reflect, in any form or shape, those of The Multimedia Group, where he works.

COVID-19 Vaccine: Ghana is on the right path

Muslim parents urged to educate their children against the LGBTQI