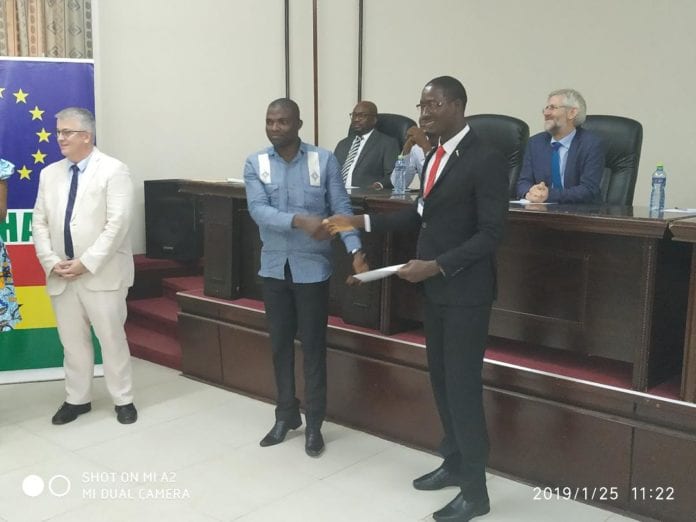 Ms. Diana Acconcia, the European Union Ambassador to Ghana has said maritime governance is needed to improve the blue economy as well as coordination of efforts to fight maritime insecurity and its associated threat.

She said this would protect human activities at sea and natural resources around the Gulf of Guinea (GoG).

Ms Acconcia said this in a speech read on her behalf at the closing ceremony for the first Gulf of Guinea Inter-regional Network (GoGIN) In-Crisis Communication Course for English speaking countries, held at the Regional Maritime University (RMU), Accra.

The 10-day Course, organized by the Inter-Regional Coordination Centre (ICC) based in Yaoundé Cameroon, and funded by the European Union and the Kingdom of Denmark through the GoGIN project, was facilitated by trainers from Expertise France.

It brought together 14 participants from five coastal countries in the GoG – Ghana, Gambia, Liberia, Cameroon and Sierra Leone.

The objective of the In-Crisis Communication Course was to prepare Stakeholders in charge of crisis management and their Public Relations Officers to be able to communicate effectively to the media in crisis situation at sea.

The participants were taken through characteristics of a media statement, organizing press conferences and presentation skills in answering questions during crisis.

Others were studio works and simulation exercise with seasoned journalists who interviewed them on potential crisis such as piracy and armed robbery, illicit, uncontrolled, unreported fisheries, shipwrecks, drug traffic and maritime spills.

Some of the challenges she enumerated included illegal, unreported and unregulated fishing, illicit dumping of waste and piracy as well as armed robbery at sea, amongst others.

She said there was also cultural barriers to effective interagency cooperation within a country and cross-border adding that “but given the various threats prevalent in the region, States are today compelled to address maritime security more than ever.”

Ms Acconcia said maritime transport represented the largest volume of the world trade stating that 90 per cent of Europe’s global trade is transported by sea.

She said the objective of GoGIN was aimed at helping countries in the region to build human capacities, critical for effective and concrete actions, adding that “GoGIN was working with the ICC to promote regional learning by connecting African maritime universities”.

Commander Derrick Attachie, the Head of Training, ICC expressed gratitude to the European Union Commission for the technical, logistics and financial support to the efforts of the countries in the region, as well as the RMU for facilitating the capacity building of maritime professionals in West and Central Africa.

He reminded all on the need to cooperate and collaborate among national stakeholders and between regional partners in the GoG as spelt out in the Yaoundé code of conduct.

“To achieve the regional objective to drastically reduce maritime crimes in the GoG begins from individual contributions to the agency, national and regional initiatives.

“I therefore urge you to maintain the close relationships developed over the course period as this would be the basis for greater collaboration at the national and regional levels”, he said.

Mr Eric Glotin, Regional Coordinator for West Africa, Regional Maritime Security called on the participants to use the knowledge gained for the intended purpose to reinforce maritime safety and security efforts in the region.

Professor Elvis Kofi Nyarko, the Vice Chancellor of RMU commended the resource persons and all the participants for the time and effort invested for a successful completion of the course.

He expressed optimism that the In-Crisis Communication Course would be included in the catalogue of courses being run by the Maritime Safety and Security center of the University.

Assistant Superintendent of Immigration (ASI) Gifty Amgborme on behalf of her colleagues lauded the organizers of the course, which had empowered them for their various fields of operations.

Certificates were presented to the participants.