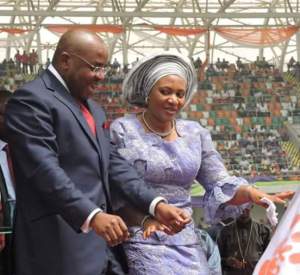 All is set as Ibibio Nation, the fourth largest ethnic group in Nigeria rolls out the drums to celebrate its own in the persons of His Excellency Mr. Udom Emmanuel, executive governor of Akwa Ibom State, his dear wife and First Lady, Her Excellency, Mrs. Martha Udom Emmanuel.

The reason for bestowing honour on this pair is instructive. While a scriptural precept avers that a Prophet is hardly accorded honour at home, these duo have through this honour altered that long held perception. They are being honoured because of their deeds. The Chairman of the Planning Committee of the reception, Otuekong Idongesit Nkanga; a well-heeled and experienced administrator noted that the grand reception is Ibibio Nation’s support to an illustrious son who has discharged his duties meritoriously. Nkanga observed that despite challenging economic times, the governor has remained resolute in the pursuit of people-oriented governance and sustainable development of Akwa Ibom State in his 24 months in office.

The quantum of achievements also recorded by the First Lady, Her Excellency, Mrs. Martha Emmanuel is also sufficient to gladden the heart and attract honour and plaudits. The prodigious sense of compassion that she has brought to governance has served as the vista for the myriad of succor her pet project, FEYReP has graciously delivered to many. Her disarming humility and total immersion in the alleviation of the burdens of the poorest of the poor are measurements of her humanity. Little wonder that she is not only a dependable pillar of support to the husband, she is also a good mother and an oasis of hope to Akwa Ibom people. As a jewel and pride of the people, Ibibio Nation has found her deserving of honour.

The decision of Ibibio Nation to honour its own is a tradition we once dearly cherished as a people. But the introduction of fratricidal and divisive politics came with the erosion of these values. Everything began to be viewed from the prism of petty politics. We have become incurably cynical and cast darts even at good things that come from the divide that we don’t belong. Such disposition can only undermine the interest of the State and subject it to arrested development. We must no longer surrender to this instinctive politics as they do not only weaken our bond of unity; it also impedes our development efforts.

Not long ago, Annang under the aegis of Ati Annang held a rousing grand reception for Governor Udom Emmanuel and his dear wife, Her Excellency, Martha Emmanuel. The colorful event which was a huge success drew the who is who in Annang and nay the entire State to celebrate a man whose special endowment, free spirit and good breeding are coalescing to take the State to enviable heights. The Annangs in that reception tended to agree that anybody who loves the State must love Udom Emmanuel.

Ibibio Nation’s grand reception also seems to key into that matrix. It is for a truth that one of the ways we can ensure the growth of our State is for us to have unbridled love for her. When we do so, its interest would always be uppermost in our mind and we will irrespective of political affiliations support what is good for the State and the people.

It is regrettable that modernity seems to be in severe battle with our values. Our forebears conceived of an egalitarian and harmonious society that attached scant regards to tribe and tongue. The oneness that they cultivated gave us a pride of place. We were seen as the fourth largest ethnic group in the Country. We were also seen as the second largest producers of cocoa in Nigeria. We were regarded, respected and always given our due amongst the ethnic nationalities. Yet our forebears who made all these possible did not acquire much education but they cultivated much love.

We recall with nostalgic agony the first scholarship scheme East of the Niger and perhaps the entire Nation. It was called the Ibibio Union Scholarship scheme. Ibibio State College was sited at what was then Ikot Ekpene soil. That vision for education which witnessed the enunciation of the scholarship programme and founding of the school gave us a pride of place. The scholarship which was spread across what is today Akwa Ibom gave us the privilege of producing the first Nigerian to have a degree in agricultural science in the person of Bassey U. Attah from Ibesikpo, the father of the former governor, His Excellency, Arc. (Obong) Victor Attah. Of course we also had Effiong U. Ekpo from Abak who studied Medicine.

There was James Nsima from Eket who did education; Egbert U. Udoma from Ikot Abasi who studied  law; Ibanga Udo Akpabio from Essien Udim, an uncle to the former governor, Senator Godswill Akpabio who studied education and Obot Anitaobong from Itu who also did medicine. These milestones were achieved because a cord of brotherhood quilted us together in one accord. Today all that is history because of politics.

It is heartwarming to note that Udom and Martha are not being honoured because they are governor and First Lady respectively. They are being bestowed with honour solely on merit. The personages behind the event like Otuekong Idongesit Nkanga and Air Marshal Nsikak Eduok (rtd.) are reputable men who have held revered public offices and so would not lend themselves or names to shenanigans.

They understand issues of development and they know that the governor is doing his utmost in all facets of governance. As Nkanga himself stated: “Governor Emmanuel has brought to bear his wealth of experience to keep the State’s economy afloat, with bold footprints in the industrial, agricultural and other sectors. Recall that the Nation Bureau of Statistics in its 2017 reports listed Akwa Ibom as the State that has attracted the highest Foreign Direct Investment in Nigeria in 2016 after Lagos, the commercial capital of Nigeria”. This is indeed a record breaking feat for a State that was hitherto civil service driven.

As we file out to give honour to whom honour is due, let us renew our vow to love one another in truth and in faith. Let us remind ourselves of the need to live in harmony in acknowledgment that God who put us together in the same geographical space with intelligible language did not make any mistake. Let us have faith in our leaders and offer them our sincere prayers with the understanding that if they fail, we fail and the State ultimately fails. Above all, let us strive to live in peace with one another as this remains the only guarantee to our collective prosperity.

To the recipients of the honour, Akwa Ibom people join their voices to say congratulations, Your Excellences.

Nigeria to Lift Ban on Twitter Starting From January 13

Nigeria a country at Ground Zero