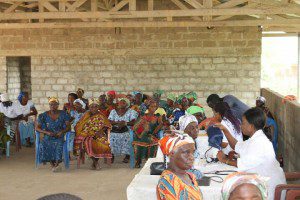 She said CHPS continued to provide critical interventions in accessing quality healthcare in reducing maternal and neonatal deaths, yet it lacked the necessary infrastructure to strengthen its operations and offer quality healthcare delivery.

Dr Sarpong said out of the 849 CHPS zone demarcated for the region, 614 were functional, but lacked infrastructure, adding that plans were advanced to ensure that, the remaining CHPS zones were functional by the close of 2017.

She said in order to reduce further maternal deaths, her outfit had set up a maternal and neonatal audit implementation and tracking committee, which collates all the audit reports and identified common trends and challenges to be used for decision making.

Dr Sarpong said, the Passion, Innovation, Commitment, Compassion and Accountability for Maternal and Neonatal Health (PICCAM) Strategy launched in 2015 to reduce maternal deaths and stillbirths, had also built the capacities of healthcare staff in the areas of life saving skills, use of pantographs, maternal and prenatal audits as well as emergency obstetric and neonatal care to be able to address complications and emergencies in maternal care.

She noted that whereas the regional health indicators improved in 2016, the Reproductive and Child Health (RCH) indicators were not too good as they experienced occasional shortage of vaccines such as yellow fever and BCG resulting in low immunisation coverage in 2016.

Dr Lovelace Senaya, a retired Director of Health, said the CHPS concept was the flagship programme of the Ghana Health service (GHS) in providing healthcare to people in the communities and called for more attention and resources to the sub districts.