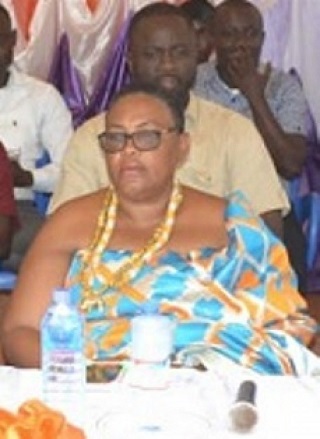 Nana Akosua Gyamfuaba, the Acting Paramount Queen Mother of Shama has described the lack of collaboration between project implementers and contractors in Regions as the bane to proper project execution.

Such contractors are imported from the capital to execute projects in Regions by project implementing agencies without the awareness of Regional Coordinating Council, assemblies, the project beneficiaries and even the custodians of the Land on the scope, time, and financials about that particular Project thereby allowing contractors to have a field day.

Nana Gyamfuaba, who joined the Public Interest and Accountability Committee on projects monitoring together with other Queenmothers was not happy that most projects inspected lacked effective collaboration with the assemblies concerned.

“All four Projects; K.G block at Ahenikofikrom, the New Takoradi durbar ground and the Sea defence imported contractors and executed their task at the blind side of the various assemblies they operated in.”
Engineers and officers from the Works Department who accompanied the team were lost on information on such projects.

The Queenmother said, “Why do we bring contractors from Accra, who do less or no engagement with even the assemblies on execution of such projects….they do anything and get away with it…
“We continue to shoot ourselves in the foot and make less meaning of local content and the decentralization concept.”

The Queenmother therefore reminded authorities on proper engagement with stakeholders, project beneficiaries to do away with such problems.

The monitoring according to Mr. Eric Defor, Chair of the Public Affairs and Communication Sub-committee was to find out the contribution of the Oil monies to project execution in the Regions.

At New Takoradi, the GHS 184, 013.41 contribution from the Annual Budget Fund Allocation to the durbar ground project was found to be flood prone area.

At Ahenikofikrom, the PIAC team inspected a one-unit KG block worth GHS 81,507.60 from the oil fund disbursed in 2018.

The KG Project though completed did not make provision for sanitary facilities that would serve the needs of the toddlers and infants.

The Amanful Kumah sea defense also lacked proper landing beach for the Fisher folks and the K.G block within the Effia Kwesimintsim Municipality could not be traced.

Mr. Mark Agyeman, the Technical Manager of PIAC stressed the need to avoid spending the monies thinly…”but make proper legacy projects that could stand the test of time”.

Mr. Solomon Ampofo, the Natural Resources Coordinator of the Friends of the Nation who hosted the PIAC team prayed that lessons learnt from realities on the ground would be absorbed by state actors to improve on the lives of Ghanaians.