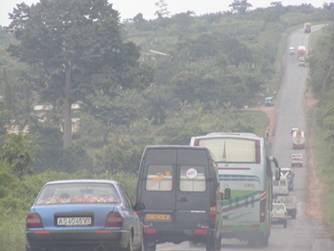 Motorists and passengers in the Asikuma Odoben Brakwa District of the Central Region, have called on the Ministry of Roads and Highways to reshape the highways.

Speaking in an interview with the Ghana News Agency (GNA) at Brakwa, Opanin Isaiah Kwame Yampson, opinion leader, described the road from Brakwa through six communities to Odoben, as the most dangerous route in the Central Region.

He said the road from Odoben to Domeabra needed culverts for the streams along the route, and gutters to help drain water flooding the road.

The opinion leader, affectionately called “I.K.” also noted that the Brakwa – Domeabra route was a terrible and hard to ply road adding, if immediate road work was not undertaken, passengers would keep perishing.

“Because the worse nature of the route include big potholes stretching for over half a kilometre intermittently, coupled with the slippery nature at certain sections of the road”, he explained.

He challenged the sector ministry to come to their aid to help avert accidents in the region, especially the Odoben – Domeabra – Brakwa main road, by urgently making provisions for the reshaping of the nine-kilometre route.

The opinion leader said due to the damaged bridge spanning Ochiso River, vehicles travelling from Akim Oda in the Eastern Region to Asikuma in the Central Region had to make a detour around the bridge through other towns.